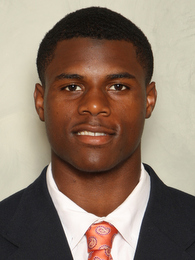 Wide Receiver
B I O
Sophomore who was the team’s top backup at wide receiver in 2014 ... has 50 receptions for 480 yards and five touchdowns, five yards on two carries and four kickoff returns for 69 yards in 725 snaps over 25 games (four starts) in his career.