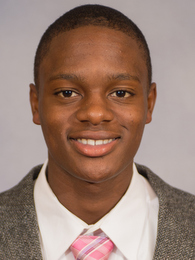 Cornerback
B I O
Junior who saw an increased role in 2015 as a cornerback ... has 14 tackles and two interceptions in 266 snaps over 15 career games (three starts) ... suffered ACL tear early in spring practice.


2015: Produced 15 tackles and two interceptions over 13 games (three starts) ... logged 253 snaps ... earned first career start against Wofford in the season opener ... tallied nine snaps against Boston College in a winning effort ... started and logged 34 snaps in win over Miami ... posted three tackles against the Hurricanes, a big moment for the Florida native ... nabbed first career interception in win over Florida State, another big moment ... started against Wake Forest and posted four tackles over 42 snaps ... also played 42 snaps at South Carolina, with his second career interception ... both interceptions were in the redzone.

Before Clemson: Rated as the No. 197 player in the nation by ESPN ... No. 19 athlete in the nation and No. 37 player in Florida by ESPN ... No. 39 cornerback in the nation and No. 51 player in Florida by 247Sports.com ... No. 43 cornerback in the nation by Rivals.com ... had 38 tackles and five takeaways, four interceptions, two of which he returned for touchdowns, one recovered fumble and five pass breakups as a senior ... had 15 receptions for 480 yards and seven touchdowns ... had five interceptions as a junior ... had two defensive returns for touchdowns and a punt return for a score as a junior ... played three seasons of basketball, but he did not play his senior year in order to concentrate on football ... ran 10.6 in the 100m and 21.5 in the 200m ... coached by Tim Tyrrell at Chaminade-Madonna College Preparatory ... recruited by Brent Venables.