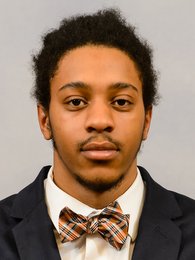 Safety
B I O
Safety enrolled in January 2015 ... came along slowly as a freshman, but became a reliable starter and special teams contributor for the 2016 National Championship team ... has 130 tackles in 1,004 snaps over 29 games (15 starts).

2016: Second-team All-ACC (coaches) ... produced 114 tackles, third-most on the team, in 929 snaps over 15 games (15 starts) ... also had two interceptions, two caused fumbles and two pass breakups ... produced nine tackles in his first start, a win at Auburn ... logged game-high 14 tackles in win over Troy, with half of a tackle for loss as well ... notched first interception of the season on a trick play at Georgia Tech ... named co-defensive player of the game for the Tigers ... posted 14 tackles in win over Louisville, while playing 100 snaps ... tallied 13 stops in win at Boston College, with a forced fumble ... had nine tackles and a pass breakup in win over NC State ... notched four tackles in 43 snaps against Syracuse ... posted eight stops, including one for loss, in 74 snaps in loss to Pittsburgh ... had pair of special teams tackles against South Carolina, part of a seven-tackle effort ... added two more special teams stops against Virginia Tech ... notched second interception of the season in Fiesta Bowl win over Ohio State and returned it 86 yards, the fifth-longest return in school history and longest ever in a bowl game ... added nine stops against the Buckeyes.

2015: Posted 16 tackles, including one for loss, in 75 snaps over 14 games ... played on defense in five games ... played special teams the entire season, primarily as a member of the punt coverage unit ... four of his 16 tackles came on special teams ... earned 16 snaps at Miami and made the most of it with six tackles ... also had an interception and returned it 33 yards against the Hurricanes ... posted a special teams tackle at NC State ... had three tackles in 17 snaps against Wake Forest ... inserted into action after T.J. Green was called for targeting in the first half of the ACC Championship Game and responded with six tackles in 38 snaps.

Before Clemson: Led William Amos Hough High School to a 10-4 record as a senior ... No. 9 player in North Carolina by MaxPreps.com ... had 444 yards and 13 touchdowns on 66 carries as a senior ... had two kickoff returns for touchdowns, including a 95-yarder, as a senior; averaged 36.3 yards per kickoff return on 10 returns ... had 74 tackles and six interceptions as a senior ... played for West Mecklenburg High School from his sophomore to junior seasons ... had 1,114 rushing yards and 12 touchdowns and added four interceptions as a junior ... teammate of fellow signee Mark Fields ... coached by Miles Aldridge, a former Clemson assistant coach ... recruited by Danny Pearman.