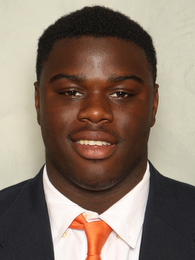 Defensive End
B I O
First-year freshman who made an immediate impact ... expected to be one of the team's best defensive linemen for years to come.

Before Clemson: Rated as the #1 prep school prospect in the nation out of Hargrave Military Academy and #1 prep school defensive end in the nation by 247Sports.com ... #3 player in South Carolina by Rivals.com ... top-300 All-American by PrepStar ... had 99 tackles, 23 tackles for loss, nine sacks, and five caused fumbles as a senior ... had 100 tackles, 23 tackles for loss, 13 sacks, and two touchdowns as a junior ... played in the North/South All-Star game, where he was named defensive MVP ... defensive MVP in the Offense/Defense All-American Bowl ... coached by Randy Robinson at Daniel High School and Troy Davis at Hargrave Military Academy ... recruited by Dan Brooks and Chad Morris.