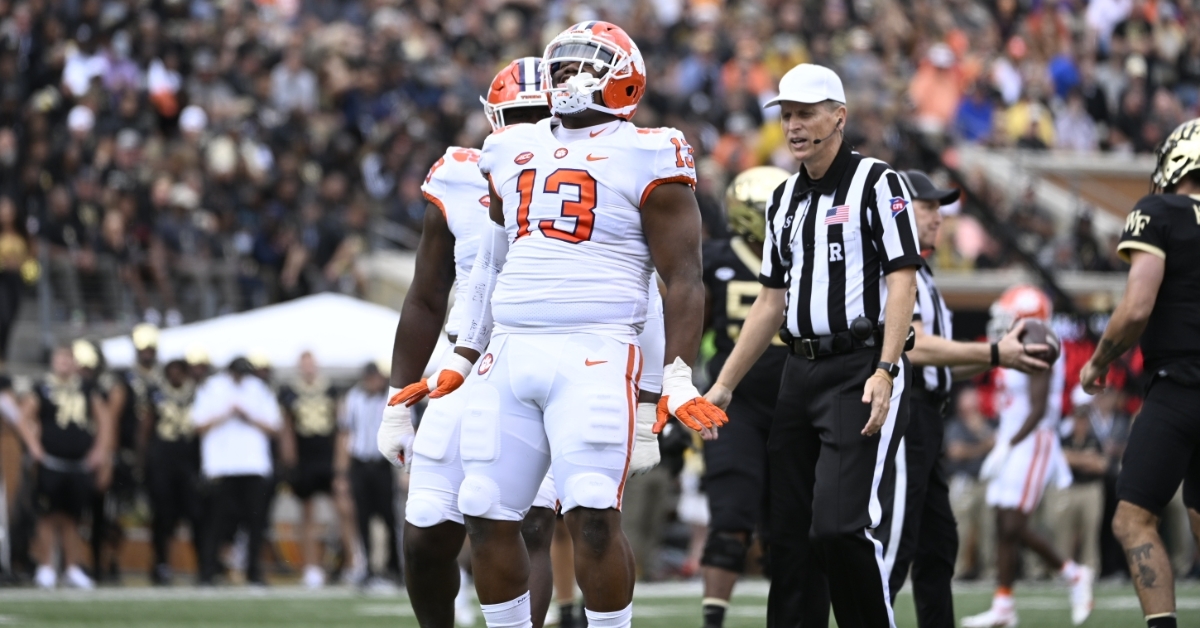 The Football Writers Association of America announced Friday that it has named Clemson defensive tackle Tyler Davis as a second-team All-American for 2022.

The 2022 FWAA team is streamlined by nine first-teamers from the four teams competing in the College Football Playoff, three repeat All-Americans and a record 16 total selections from the Big Ten Conference. There are 19 schools represented from six Football Bowl Subdivision conferences on the first team and 34 different schools and eight conferences plus an Independent included on the overall 54-man team.

“Partnering with the Cotton Bowl Classic each year to name this team and honor these standouts is always special. Making these teams is an honor that will stick with players long after they leave their campuses,” said FWAA President David Ubben of The Athletic. “There are always so many deserving talents but it’s great to see big names we know like Will Anderson, Jack Campbell and Olusegun Oluwatimi have big-time seasons once again but it’s also incredible to see our team reflect the breakout season TCU enjoyed this year. It’s always difficult to narrow down the team but it’s also a sign of strength in the sport when there are so many deserving candidates at so many positions. College football’s on-field product is in great shape.”

Georgia, the top seed in the College Football Playoff, has three members on the first team but it was fellow playoff qualifier TCU which led all schools with four players on the combined team. Michigan, which faces TCU in a playoff semifinal at the Vrbo Fiesta Bowl on Dec. 31, and Ohio State, which takes on Georgia in the other semifinal in the Chick-fil-A Peach Bowl, join Notre Dame, Pitt and USC with three players each on the combined team.

Alabama’s star linebacker Will Anderson, Jr., who this week earned his second Bronko Nagurski Trophy from the FWAA as the nation’s top defensive player, returns to the All-America first team. Anderson led the SEC with 10 sacks (t-6th in FBS) and 17 tackles for loss (7th in FBS).

Two other players join Anderson as now two-time All-Americans on the first team in Michigan center Olusegun Oluwatimi, the 2002 Outland Trophy winner who earned second-team honors at Virginia a year ago, and Iowa linebacker Jack Campbell, this year’s winner of the National Football Foundation’s prestigious William V. Campbell Trophy and the Big Ten’s Defensive Player of the Year who averaged 9.8 tackles per game. Oluwatimi is one of four Big Ten offensive linemen on the first team along with Northwestern’s Peter Skoronski, the Big Ten’s Lineman of the Year and an Outland Trophy finalist, Ohio State’s Paris Johnson Jr., and Minnesota’s John Michael Schmitz. It’s the first time in a decade (2012) for one conference to place four linemen on the first team.

The four players from TCU, the school’s highest number on the annual FWAA list, represent the different parts that sent the Horned Frogs to compete for the national title. Up front, Steve Avila is TCU’s first FWAA All-America offensive lineman and an Outland finalist, and joins special teams punt returner Derius Davis as the Horned Frogs’ first first-teamers since 2015. In the two backfields, TCU has quarterback Max Duggan on the second team offense and defensive back Tre’Vius Hodges-Tomlinson extends TCU’s string of placing an All-American in the secondary in three of the last four seasons.

Georgia defensive back Chris Smith, who was a Bronko Nagurski Trophy finalist, tight end Brock Bowers and defensive lineman Jalen Carter represent the Bulldogs, the only team to place three on the first team and the only school to have two members on defense. Michigan, with workhorse running back Blake Corum joining Oluwatimi on offense, and Ohio State, which has dynamic wide receiver Marvin Harrison Jr. joining Johnson, were the only schools to place two members on offense. The Big Ten owns nine of the first-team selections to the Southeastern Conference’s seven, and combined (16 and 11, respectively) make up half of the 54-member team.

Iowa, Mississippi State and USC also have two first-team members. USC’s Caleb Williams leads the offensive selections at quarterback and has teammate Tuli Tuipulotu, another Bronko Nagurski Trophy finalist, anchoring the defensive line. The Pac-12 has four members on the first team and seven overall, its best totals since 2019. Special teams members earned Iowa and Mississippi State their double representation, Iowa with punter Tory Taylor and Mississippi State with kick returner Lideatrick Griffin, who led the nation’s returners by five yards with a 32.3-yard average. Mississippi State also put defensive back Emmanuel Forbes on the first team after he tied for second nationally with six interceptions, returning three of them for touchdowns.

Texas running back Bijan Robinson is the Longhorns’ second All-American of the last five seasons, their first on offense since 2016. Also from the Big 12, Texas Tech defensive lineman Tyree Wilson, the Big 12 leader in tackles for loss (14.0), is the Red Raiders’ first first-team selection since 2018 and its first defensive lineman honoree since 1998.

Tennessee’s resurgence this season came from its passing game, and that’s represented in wide receiver Jalin Hyatt on the first team after he tied for the national lead with 15 receiving touchdowns. Pitt defensive lineman Calijah Kancey, who was a finalist for both the Bronko Nagurski and Outland Trophies, is on the first team and leads the Panthers’ three overall selections that tie for second among all schools.

Cincinnati’s reputation as one of the nation’s top defensive programs continues with the first-team selection of linebacker Ivan Pace, Jr. The Bearcats have now had a first-team defender in three consecutive seasons. Utah defensive back Clark Phillips III, who led the Pac-12 and tied for second nationally with six interceptions, extends the Utes’ string with at least one All-American in eight of the last nine seasons. Phillips is Utah’s fourth All-American on defense in the last four seasons. Illinois defensive back Devon Witherspoon is Illinois’ first FWAA All-American since 2011 – his 17 passes broken up were sixth in the nation.

N.C. State kicker Christopher Dunn gives the Wolfpack back-to-back All-Americans and its first on special teams since 1996. Dunn was second nationally making 24 of 25 field goals for a 96 percent success rate. UCLA running back Zach Charbonnet was among the top playmakers this season and earned the All-Purpose spot on the first team. Charbonnet led the nation averaging 168.0 all-purpose yards per game.

Among second-team notes, Michigan defensive lineman Mike Morris is the Wolverines’ third overall selection as is Ohio State linebacker Tommy Eichenberg. Notre Dame was also among the seven schools with three members, each of them on the second team with tight end Michael Mayer, offensive lineman Joe Alt and defensive lineman Isaiah Foskey. In addition to Schmitz, Minnesota has two players on combined team for the first time since 1961 with Mohamed Ibrahim placing from a crowded Big Ten running back field in the second-team spot. Illinois running back Chase Brown earned the second-team all-purpose slot, earning the Illini two players on the combined team for the first time.