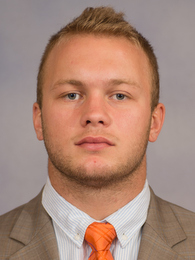 Outside Linebacker
B I O
Two-year starter at linebacker who left a legacy after serving as Clemson’s top backup in 2014 ... posted 352 tackles, 26 tackles for loss, 8.5 sacks, five interceptions, 41 quarterback pressures, 10 pass breakups, six caused fumbles and four recovered fumbles in 2,131 snaps over 53 games (31 starts) in his career ... first Tiger in 24 years with a pick-six in a bowl game when he had one against Oklahoma in 2014 ... only linebacker in program history with an interception in consecutive bowl games, and they were against the same team (Oklahoma) ... had 17 career double figure tackle games, and Clemson was 16-1 in those games ... earned invitation to the Senior Bowl ... two-time All-ACC Academic Team (2015,16) selection.

2016: Earned Jack Lambert Award as nation’s top linebacker ... second-team All-American by AFCA, Football Writers Association, Phil Steele, USA Today and Walter Camp ... third-team All-American by the Associated Press ... first-team All-ACC (media, coaches) ... ACC Co-Defensive Player of the Year (coaches) ... National Championship Game Most Valuable Defensive Player ... shared Tiger Pride Defensive Team MVP honors with Jadar Johnson and Carlos Watkins ... Strength & Conditioning All-American ... Strength Dedication Award winner ... one of six permanent team captains ... team leader with 131 tackles in 882 snaps (14 starts) ... had 11.5 tackles for loss and four sacks as well ... notched an interception in the win at Auburn, the fifth of his career ... suffered an injury in the second half against Troy and missed the SC State contest ... posted team-high 10 tackles at Georgia Tech ... amassed team-high 17 tackles, including three for loss, in top-five win over Louisville ... also added a pass breakup and fumble recovery against the Cardinals, while playing 101 snaps ... named Bednarik Award Player of the Week, Nagurski Award Player of the Week, Lott Trophy Impact Player of the Week and ACC Linebacker of the Week for his efforts ... posted 12 tackles at Boston College, with a caused fumble ... posted sack that ended Florida State’s chance of winning in 37-34 victory in Tallahassee ... produced team-high 12 tackles against Pittsburgh ... posted 10 stops, including 2.5 tackles for loss and two sacks, in win over South Carolina ... also forced a fumble against the Gamecocks ... shared team-high honors with 11 stops in win over Virginia Tech in ACC Championship Game ... led Tigers to shutout win over Ohio State, a first for coach Urban Meyer, in the Fiesta Bowl, amassing seven tackles and two pressures ... posted 10 tackles in the National Championship win over Alabama, including two for loss ... also had a memorable pass breakup when his hit dislodged the mouthpiece of a Crimson Tide receiver.

2015: Honorable mention All-American by Sports Illustrated ... first-team All-ACC (coaches) ... second-team All-ACC (media) ... All-ACC Academic Team selection ... first Tiger defensive player since Mark Drag (1988) to be named All-ACC on and off the field in the same season ... second-leading tackler on the team with 138 ... had six double figure tackle totals in a seven-game period from October 3 through November 14 ... started all 15 games, with eight tackles for loss and 3.5 sacks ... led the team with 29 quarterback pressures ... third with seven pass breakups ... a disruptive player, he led the Tigers with three caused fumbles ... opened the season strong, with nine tackles in a 49-10 win over Wofford ... credited with six quarterback pressures against Appalachian State, and was named defensive player-of-the-game by the coaches ... tallied two pass breakups and nine tackles in the win at Louisville ... notched 12 tackles, a pass breakup, caused fumble and quarterback pressure against Notre Dame ... shared coaches player-of-the-game honors defensively against Georgia Tech after posting 11 tackles ... again earned coaches player-of-the-game honor against Boston College, this time after a 13-tackle performance ... posted team-high 13 tackles and first sack of the season at NC State ... followed with another team-high 14 tackles in win over Florida State, including crucial stop on fourth-and-1 late ... forced a fumble in the fourth quarter against the Seminoles as well ... posted 13 stops at Syracuse ... had a caused fumble and 2.5 tackles for loss (including 1.5 sacks) in home finale versus Wake Forest ... suffered a shoulder stinger in that win, but played through the pain in wins over South Carolina and North Carolina ... named defensive Most Valuable Player in the Capital One Orange Bowl after recording an interception in the fourth quarter, to go along with a sack, in the win over Oklahoma ... posted six tackles in the National Championship Game.

2014: Had 58 tackles, five tackles for loss, one sack, six quarterback pressures, one pass breakup, a 47-yard interception return for a touchdown and two recovered fumbles in 326 snaps over 13 games (two starts) ... had four tackles in 18 snaps at No. 12 Georgia on Aug. 30 ... had three tackles in 31 snaps against SC State on Sept. 6 ... had four tackles in 16 snaps against North Carolina on Sept. 27 ... had a team-high 12 tackles, a game-high three tackles for loss and one sack in 59 snaps against Louisville on Oct. 11; it was his first career start; named team co-defensive player-of-the-game ... had three tackles and a key pass breakup on the Eagles’ last drive of the game in 31 snaps at Boston College on Oct. 18 ... had three tackles, 0.5 tackles for loss and a team-tying-high three quarterback pressures in 34 snaps at Wake Forest on Nov. 6 ... had seven tackles in 27 snaps at No. 23 Georgia Tech on Nov. 15; named team special teams player-of-the-game ... had a team-tying-high 10 tackles and one tackle for loss in 27 snaps against Georgia State on Nov. 22 ... had four tackles and a recovered fumble in 23 snaps against South Carolina on Nov. 29 ... had a team-tying-high six tackles, 0.5 tackles for loss, a recovered fumble and a 47-yard interception return for a touchdown against No. 24 Oklahoma in the Russell Athletic Bowl on Dec. 29.