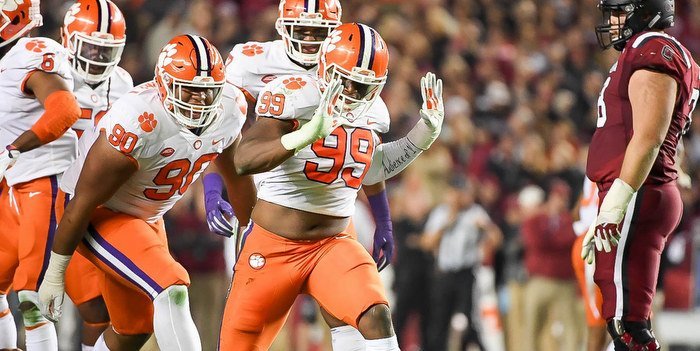 The 34-10 win combined with upset losses in the top two spots moved Clemson to No. 1 in the Coaches Poll.

The win was the 100th in Dabo Swinney’s career, and one with some emotion to it, as he was called for a flag after calling on the referees to do something about the South Carolina students throwing objects on the field.

Clemson improved its series record over the Gamecocks to 69-42F-4.

Twitter, including some former players and current recruits having some fun with it, had plenty to say about the Tigers at 11-1:

Proud to be a part of @ClemsonFB where Coach Swinney cares more about the development of men than the numbers on a scoreboard. Win with class, lose with class...Either way, honor God, respect others, & be #ALLIN

My shocked face that South Carolina fans are throwing things on the field pic.twitter.com/CqCYfIWyhj

Always has & always will be the little brother. pic.twitter.com/2Zq3SCPpTA

I almost feel bad for beating up on our little brothers down in Columbia but we have to teach them who runs the state #Clemson???????????

Here you go Carolina .. I just got it from target ...but ??you can have it #ClemsonvsUSC pic.twitter.com/uHbm6xBsO6

Clemson- when healthy I think they are the best team in country, Kelly Bryant throwing will Be the key as they look to beat Miami, Defensive from is most talented even though they don’t always play the best

When you look at Clemson’s wins, there is absolutely a scenario where they lose to Miami and still get in. They’d probably be ahead of Bama and Ohio State.

Here's how to arrive at this Top 6:

He scored a 61-yd touchdown AND won at rock, paper, scissors...

That Hunter Renfrow is going to have to put that accounting career on the back-burner for a while. He’s got some pro ball to play. #clemson #nfl