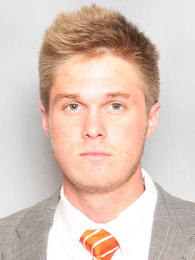 Quarterback
B I O
Original walk-on who was the backup quarterback each of his final two seasons ... was 44-66 passing for 564 yards and three touchdowns in 212 snaps over 19 games in his career ... completed 67 percent of his passes with a 150.4 pass efficiency rating.

Clemson traveled with a symptomatic player to FSU? Of course not