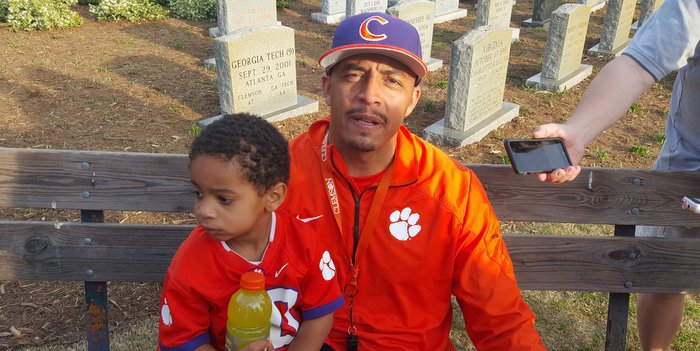 Elliott talks to the media Friday

CLEMSON – Like most football teams, Clemson is beginning to deal with bumps and bruises as spring camp progresses, but for Tony Elliott it was an injury that wasn’t that had Elliott excited Friday.

The Tigers’ co-offensive coordinator – along with his young son – held court with the media following Friday afternoon’s spring practice and talked about the rotation at running back. Starter Wayne Gallman obviously has the top spot but he’s being pushed by Adam Choice, C.J. Fuller and Tyshon Dye.

Dye, who has battled injuries throughout his Clemson career and missed most of 2014 with an Achilles tendon injury, had another Achilles scare earlier in camp.

“It was nothing major,” Elliott said. “Obviously, I would be scared to death, too, coming off two serious injuries like that and then all of a sudden I feel a little something in that same foot. I think it scared him more than anything.”

Dye took it easy before and during spring break and once he learned the injury wasn’t serious came back with some serious swagger.

“He came back the last couple of days, and he seems like he has been on a mission,” Elliott said.

“Wayne is doing well and has improved. I am seeing him really try to distance himself. Adam has been impressive, and I've seen his confidence grow daily. All of those guys are competing, but I am not ready to say there is a number two guy. I have to keep pushing them.”

Defense challenged the offense in scrimmage

“The biggest things are the things that we can control. We had a couple of snap issues and we had a fumble at the mesh - just things and points of emphasis that we've talked about since the championship game. Don't lose to Clemson - those are the biggest things. But there was a lot of good in the scrimmage as well. A lot of competitive plays. The defense is really challenging us. Brent (Venables) has been very aggressive this spring challenging his guys to get better.”

Separation at backup quarterback between Kelly Bryant and Nick Schuessler

“I think both of those guys are competing. You would like to say (Bryant) is, but he still has some things he has to clean up. It’s the same thing with Nick. I think it is going to be more of a situation … depending on what has to be done in the game as far as what guy you run out there first. We are really pushing Nick to push Kelly and Kelly is really pushing Nick. We will see who is going to separate to be that guy. I think Tucker has to grasp the playbook and when he gets his opportunity take advantage of it and prove that he can command the entire system both running and passing.”

Competition between Tyrone Crowder and Maverick Morris at right guard

“Still pretty tight. They are competing every day. And it's not just them because you have (Taylor) Hearn, too. You really have to find who the best two guards out of those three are so we can go. They had a great opportunity to challenge themselves today - we were a little thin on the offensive line. You had Maverick out at tackle and Hearn out at tackle. Obviously Tyrone is an interior guy but there is a lot of competition.”

“Obviously, his skill set is different. All of those guys bring something different to the table, but he has the ability to have the complete package. He is closer to that Dwayne Allen, a prototypical guy for the system.”

"It's still early but I am very pleased with where those guys are. Pollard was down a little bit today, but we're pleased with Anchrum and Sean. They both move very well, they bend and you can tell they come from great football programs. They are going to make a push. I am not ready to say where they are going to be because we have six practices in the spring and 30 practices before we play but I can definitely see those guys pushing to be guys who can contribute early.”

“Ray-Ray (McCloud) has those flashes that everybody sees, but it's just getting him to be consistent and compete at a high level every single play and go push Artavis (Scott). That's a position where you need two guys and he has the ability to be out there. Shadell (Bell) has been hampered a little bit with his foot so he hasn't been able to turn himself loose. And Trevion - with Mike's situation - has been getting a lot of work but still showing some immature moments.”