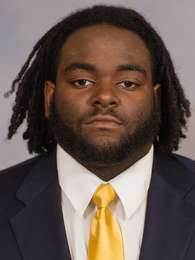 Offensive Guard
B I O
Senior who has earned a pair of all-conference honors in his career, including first-team honors in 2016 as a junior ... has 46 knockdowns in 1,833 snaps over 34 career games (28 starts).

2015: Third-team All-ACC (media, coaches) ... had 16 knockdowns in 761 snaps over 13 games (12 starts) ... big reason the Tigers posted 11 straight games with at least 500 yards of total offense to finish the season ... graded 91 percent in the opener against Wofford ... followed with an 89 percent mark against Appalachian State ... had three knockdown blocks in win at Louisville ... graded 86 percent with three knockdowns in playing all 65 snaps against No. 6 Notre Dame ... named co-offensive player-of-the-game by the coaches ... posted 87 percent effort against Boston College ... graded 89 percent and helped pave way for 416-yard rushing effort at Miami ... suffered toe injury just two snaps into the Florida State game ... missed games against Syracuse and Wake Forest ... returned at South Carolina and logged 54 snaps, with a 91 percent grade ... started ACC Championship Game, playing 62 snaps with a 91 percent effort ... posted two knockdowns with an 88 percent grade in 89 snaps against Oklahoma in the Capital One Orange Bowl ... played all 85 snaps of the National Championship Game against Alabama and contributed an 87 percent grade with a knockdown block.