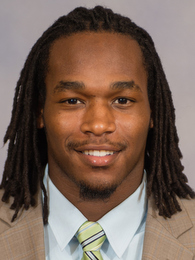 Running Back
B I O
Junior who was injured most of 2014 before returning to make an impact in the latter stages of the season ... one of the team’s most physical running backs ... has rushed for 242 yards and four touchdowns on 55 carries in 104 snaps over 10 career games.

2015: Had 91 rushing yards and two touchdowns over six games ... had two short touchdown runs in the season opening win over Wofford ... rushed eight times for 52 yards at Miami ... had 11 yards on three carries against Wake Forest.

2013: Redshirted; suffered a back injury that forced him out of action ... ACC Academic Honor Roll member ... No. 32 signee in the ACC in the preseason by Athlon.