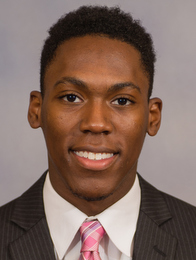 Running Back
B I O
Junior who has made a name for himself as one of the nation’s most physical running backs ... vastly improved as a blocker and pass-catcher out of the backfield ... through two seasons and 27 games, has 2,296 rushing yards on 444 carries, with 17 touchdowns ... has added 45 career receptions for 321 yards and two touchdowns ... passed Raymond Priester’s single-season school record for rushing yards in 2015 ... preseason third-team All-American by Athlon ... nation’s No. 7 preseason running back by Lindy’s.

2015: Member of the Doak Walker Award preseason watch list ... preseason second-team All-ACC by Phil Steele.First-team All-ACC (coaches) ... second-team All-ACC (media) ... posted team and Clemson single-season high 1,527 rushing yards and 13 touchdowns ... also had 21 catches for 213 yards and a score ... appeared in 14 games, with 13 starts ... posted two rushing touchdowns and ran for game-high 92 yards in the season opener against Wofford ... posted 79 yards on the ground versus Appalachian State, including 23 on a tremendous touchdown run in which he lowered his shoulder and ran over a Mountaineer defender ... rushed 24 times for 139 yards at Louisville, most of which came after contact ... named offensive player-of-the-game for the performance ... rushed for 111 yards on 23 carries against No. 6 Notre Dame ... third straight 100-yard effort came against Georgia Tech and included 66-yard career-long scamper to open the scoring ... added 118 yards and a touchdown at Miami ... rushed 31 times for 172 yards in win at NC State, with a touchdown ... notched 103 yards in win over Florida State, with the game-clinching 25-yard touchdown late in the fourth quarter ... sat the Wake Forest game due to injury ... returned and rushed for over 100 yards for a seventh time, matching single-season school record, at South Carolina ... surpassed the mark with 187-yard performance in the ACC Championship Game against North Carolina ... 168 of his yards came in the second half ... also scored twice, including his first of the season on a reception, in the game; had 68 receiving yards, giving him 255 all-purpose yards ... posted 26 carries for a game-high 150 rushing yards and two touchdowns in the Capital One Orange Bowl against Oklahoma, one of two 100-yard rushers for the Tigers in the 37-17 win.