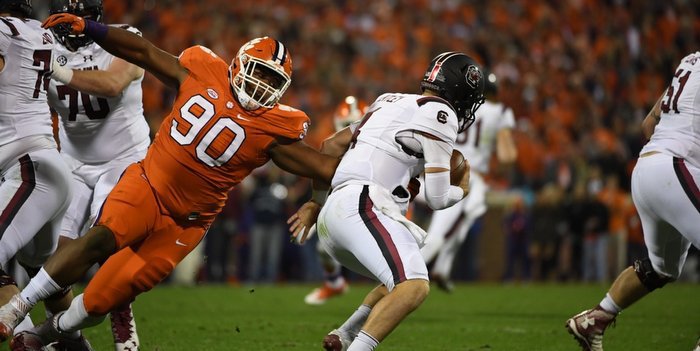 Jake Bentley was harassed into a dismal performance

The Tigers were dominant from the start, racing out to a 21-0 first quarter lead and by 35 at halftime. Watson finished the night 26-of-32 for 347 yards and six touchdowns, the most touchdown passes thrown by any quarterback in the series that Clemson leads 68-42-4.

Watson’s day was done midway through the third quarter, but he wasn’t the only Tiger with a big day. Receiver Mike Williams had six catches for 100 yards and a career-high three touchdowns, Artavis Scott had eight catches for 77 yards and a score and running back Wayne Gallman carried the ball 19 times for 112 yards and a touchdown.

“First of all, I’m very happy for our fans. We know the importance of this game and how everyone lives with the results all year," head coach Dabo Swinney said. "I’m very happy for our players, especially our seniors. For them to finish the regular season like this is incredible. This was a dominant performance. It was Clemson’s largest margin of victory over South Carolina since 1900. What a way for these seniors to go out. They were ready from the opening snap.

“Our defense was tremendous all night. Offensively, we dropped a couple of touchdown passes, but overall we played great. We ran the ball, dominated the line of scrimmage and came away with 40 first downs. Deshaun (Watson) was unbelievable. He played lights out. We were able to sub a lot in the third quarter, and all those guys played well. I’m really proud of our preparation. What a great night for football."

The Tigers are 11-1 and will face Virginia Tech in the ACC title game next Saturday.

“We’re division champs and state champs, and now we’re looking to be ACC champs," Swinney said. "Virginia Tech will be tough, but we’re looking for our 16th ACC title. There’s still a lot of opportunity left for us. It’s fun when you can see the finish line. We’re going to empty our tank this week and get ready for a tough Virginia Tech team.

“I’m really proud of our team. Every senior skill player had a touchdown tonight - Wayne Gallman, Jordan Leggett, Mike Williams and Artavis Scott. There were a lot of big moments. You have to give credit to our offensive line...they dominated the game. I’m proud of our staff and our team. And again, I’m really happy for our fans.”

Swinney said the Tigers did a good job of managing the emotions of a rivalry game.

“Our players managed their emotions well tonight. You can’t be emotional in this game," he said. "You have to prepare for it and play totally locked in. Championship football comes down to one play at a time. We know the opportunity that’s left for us, but you have to dominate the moment. That’s what our guys did all night and I’m proud of them. We’re excited to come to work tomorrow and we’re excited to have another game on Saturday. That means we’re playing for a championship.”

The Gamecocks went three-and-out on the first drive of the game, and Tigers put together a nice drive that ended with a 39-yard field goal attempt by Greg Huegel. The kick was low, however, and Ulric Jones blocked it and the teams were scoreless just three minutes into the game.

Bentley thought he had tight end Hayden Hurst open on the sideline on the first play of the next drive, but safety Jadar Johnson broke on the ball for his fifth interception of the season, giving the Tigers the ball at the South Carolina 47. Three plays later, Watson hit Mike Williams with a beautiful over the shoulder throw for a 34-yard touchdown toss and Clemson led 7-0 barely four minutes into the game.

The Gamecocks were forced into another punt, and the Tigers put together a nice drive that was aided by a big pickup on 4th-and-1 by Gallman. Two plays later Watson threw a pass that Williams caught at the seven, and Williams carried three Gamecock defenders into the endzone for the touchdown and a 14-0 lead.

The Gamecocks were once again stuffed on three plays, but Will Muschamp went into his bag of tricks and tried a fake punt with Hurst. Hurst didn’t have any open receivers and elected to run for the first down, but he came up short at his own 32. It took the Tigers just five plays to cover the 32 yards, with Watson hitting a wide open Jordan Leggett from 11 yards out for the 21-0 lead with 2:05 to play in the first quarter.

South Carolina, meanwhile, failed to generate any offense in the first half and didn’t get a first down in the first quarter and didn’t cross midfield until almost six minutes remained before the half. The Tigers put together two scoring drives in the final three minutes of the half, the first one traveling 45 yards in just six plays and ending with an eight-yard run by Gallman for a 28-0 lead.

The Gamecocks finally took a snap in Clemson territory –marching as far as the Clemson 43 – but Muschamp elected to punt the football on fourth down instead of going for it, and Clemson took over at its own 20 with 47 seconds to play.

Watson completed passes of nine yards to Scott and 30 to Leggett to get into Gamecock territory, then hit Williams for gains of 19 and six yards. Two plays later Watson hit Williams in the middle of the field and Williams once again carried Gamecock defenders into the endzone, completing a 16-yard scoring toss with just eight seconds left on the clock, and Clemson led 35-0 at intermission.

It took the Tigers just over two minutes to add to the score in the third quarter, driving 66 yards in just six plays and scoring on an 18-yard pass from Watson to C.J. Fuller in the corner of the end zone for a 42-0 lead.

The Gamecocks replaced Bentley with Brandon McIlwain, and he engineered a touchdown drive that ended when wide receiver Deebo Samuel threw a 33-yard touchdown pass to Bryan Edwards, making it 42-7 with 11:24 left in the third quarter.

Clemson answered with another scoring drive, one that continued Watson’s assault on the record books. The Tigers took 6:39 off the clock and went 80 yards in 14 plays, capping off a physical and dominant drive with a three-yard scoring toss to Scott and Clemson led 49-7 at the 4:38 mark of the third quarter.

The Tigers added a late touchdown on Kelly Bryant’s one-yard run with just over three minutes to play.

The Tigers travel to Orlando next Saturday night to play Virginia Tech in the ACC Championship Game. The game kicks off at 8 p.m.