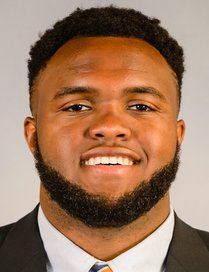 2018: Made a season-high six tackles at Texas A&M … recorded two sacks among his three tackles against Georgia Southern, collecting team co-defensive player of the week honors … added another sack at Georgia Tech … posted four tackles in comeback win vs. Syracuse.

2016: Earned share of the defense’s 12th Man Award, along with Marcus Edmond and Scott Pagano … suffered a foot injury in August camp and missed the first six games of the season … had 16 tackles, including three for loss and two sacks, in 244 snaps over nine games … returned to action against NC State, tallying half of a sack in the overtime win in 27 snaps … posted 1.5 sacks in 27 snaps at Florida State, a 37-34 Tiger victory … posted three tackles, including half of one for loss, in victory at Wake Forest … posted half a tackle for loss against Virginia Tech … saw significant action in both bowl games, including 39 snaps versus Alabama when starter Clelin Ferrell went down with an injury … broke up a pass and had a quarterback pressure in the win over the Crimson Tide.

2015: Logged significant action as a backup to both Kevin Dodd and Shaq Lawson, appearing in 13 games and 219 snaps … had four quarterback pressures and two special teams tackles, as well as a fumble recovery … posted five tackles in his debut against Wofford … tallied nine stops, including one on special teams, in win over Appalachian State … missed Georgia Tech game with an injury … notched first career sack at NC State … knocked down a pass and had key quarterback pressure in win over Florida State … had half a tackle for loss against Wake Forest … posted three tackles and a fumble recovery in the ACC Championship Game against North Carolina … came off the bench to see 63 snaps with Shaq Lawson injured in the Capital One Orange Bowl and contributed eight tackles, including half a sack.