CLEMSON – It’s been a busy 24 hours in Clemson and the weekend is about to get even crazier, so before we go any further we want to drop a few notes concerning Wednesday’s start to spring practice.

That includes the first look at the freshmen, which we touched on yesterday. Last year we spent the early part of the first practice watching quarterback Trevor Lawrence, but I walked over to watch freshman receivers Joseph Ngata and Frank Ladson and tight end Jaelyn Lay.

We will start with Ngata. Last fall we watched freshman receiver Justyn Ross and noted that he looked physically ready to play. He didn’t disappoint, fashioning a stellar freshman campaign that ended with his performance in the College Football Playoff that caught the attention of the nation.

Ngata looks like he’s ready to play today, but he has all of spring practice and fall camp to get ready, a luxury that Ross didn’t have. The Tigers are already loaded at receivers – Ross and Tee Higgins and Amari Rodgers and Diondre Overton and TJ Chase and Cornell Powell and Derion Kendrick – that’s a lot of big-time players who have experience, so he won’t have to contribute right away. But the guess here is that the coaches find a way to get him on the field.

Ladson needs to add a little weight, but his burst off the line is incredible. I watched him at The Opening last July in Texas, and he showed off his speed there. Both Ngata and Ladson fit in just fine with Jeff Scott’s group.

As for Lay – we’ve mentioned before that he is another physical specimen, but he has a lot to learn before fall camp. Clemson asks a lot of their tight ends – including blocking – and it takes time to learn the system.

“Physically -- wow," Swinney said of Lay. "You want him off the bus first, that's for sure. We have a lot to teach. That's probably the most difficult position offensively maybe outside of quarterback and offensive line. There's just so much involved. But, he did a nice job today. He showed up a couple of times and had a couple plays."

Over on the defensive line, Logan Cash stood out right away because of his hair. He has locks that rival those of Trevor Lawrence, but when he puts on a helmet, the similarity ends. Cash looks like he is already in the 270-pound range, and he moves well for a man his size.

Etinosa Reuben and Ruke Orhorhoro looked like your typical freshmen, wondering where to line up and how to run through drills. Both might take a little longer to be ready to play than say, Xavier Thomas, but as we’ve mentioned before, they have all spring and fall camp to learn the defense.

Another lineman that stood out was defensive tackle Tyler Davis. He looks the part, and he didn’t look like a freshman during drills. We get to watch the first part of Friday’s practice, and we’ll have more on him and other freshmen after that session.

Two quick notes to pass along – Sean Pollard took snaps at center in the postseason, and he lined up with the first-team offense at center Wednesday. I asked him in between playoff games why he was taking snaps at center, and he laughed and said, “Why not?” Gage Cervenka was at right guard. 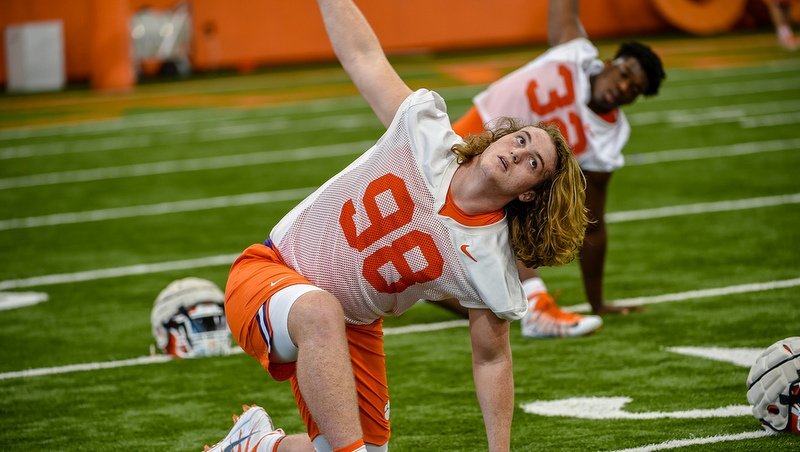 Head coach Dabo Swinney made it a point to let everyone know that Lawrence still has to win his job.

“It’s not his job. He has to win the job. That’s the wrong narrative,” Swinney said. “Nobody has a job – you have to prove it all over again. That’s just the way it is here. Nobody has a job. You have a starting point, but you have to come out here and prove every day that you still deserve to be the guy. That’s just the way it is – it doesn’t matter who you are. Deshaun (Watson) had to prove it every year, every day. That’s just the type of urgency that we preach, and the guys love that, that’s why we do it. It’s a competition all the time.

"I’ll tell you what – Chase Brice had a great day today. We’re in a great spot at quarterback. I feel great about those two guys and where they are – mentally and physically – at this point. But, nobody’s got a job. Everybody has to earn their job every single day. There’s nothing that carries over. We don’t get to all of a sudden start on second base. Everybody is back in the batter’s box with a clean slate, and you have to earn it. If you get on base, it’s because you earned it.”

Finally - one staff member (not a coach) and I spoke briefly last fall during practice, and he said, “I’ve been around a lot of championship teams, and this looks a championship team.” As I was walking off the field Wednesday, I looked his way, and he held his thumb and forefinger about half an inch and apart and said, “Not there yet. But close.”