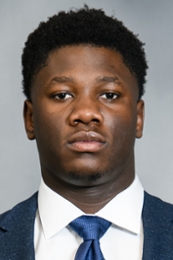 Defensive Tackle
B I O
Enters 2022 credited with 47 tackles (9.5 for loss), 3.0 sacks, three pass breakups and a fumble recovery in 619 career snaps over 27 games (nine starts) … played two snaps on offense in 2021 in Clemson’s jumbo package.
2021:Stepped up in the absence of Bryan Bresee after the fourth game of the season and became a breakout contributor for the Tigers … credited with 42 tackles (8.0 for loss), 2.5 sacks, three pass breakups and a fumble recovery over 502 snaps in 13 games (nine starts) … named fourth-team all-conference by Phil Steele … made three tackles (0.5 for loss) vs. No. 5 Georgia in his first career start … credited with a team-high six tackles (two for loss) vs. SC State, sharing team defensive player of the game honors … added four tackles (0.5 for loss) vs. Georgia Tech … recorded four tackles and his first career fumble recovery at NC State … contributed two tackles (0.5 for loss) with a half-sack vs. Boston College … recorded four tackles with a half-sack at Syracuse, sharing both team defensive player of the game and team special teams player of the game accolades … made one tackle at No. 23 Pitt … added three tackles (1.5 for loss) with a half-sack vs. Florida State … credited with two tackles and a pass breakup at Louisville … recorded a five-yard sack among his two tackles vs. UConn … made three tackles (one for loss) vs. No. 13 Wake Forest … added six tackles at South Carolina … registered two tackles and a pass breakup vs. Iowa State.
2020: Limited to 33 defensive snaps over four games, qualifying for a medical redshirt after missing most of the season with an injury sustained in season opener at Wake Forest … saw limited action at Virginia Tech, vs. No. 2 Notre Dame and vs. No. 3 Ohio State to close the season … ACC Honor Roll selection.
2019: Credited with five tackles (1.5 for loss including a half-sack) in 84 snaps over nine games … made collegiate debut vs. Georgia Tech … played in wins at Syracuse and vs. Charlotte … made one tackle vs. Boston College … added two tackles (one for loss) vs. Wofford … split a sack vs. Wake Forest … made one tackle at South Carolina.
Before Clemson: Played high school football in Michigan, becoming the first Clemson football signee from the state of Michigan since 1975 (Joe Carolan) … athletic defensive end who played just two years of high school football … ranked as 15th-best overall player in Michigan by 247Sports, 18th-best by Rivals.com and 17th-best in Michigan by ESPN.com … born in Nigeria and came to the United States when he was nine … played basketball as a youth and in high school … averaged a double-double as a sophomore … the week after his sophomore season of basketball ended in the state semifinals, he met with the school’s football coaches and decided to join the team for spring practice … did not play his first football game until the fall of 2017 … had solid 2017 and received some offers from Michigan and Michigan State … as a senior in 2018, had 13 sacks and 22 tackles for loss to go with 60 tackles … scored a touchdown on a fumble return … helped team to an 8-2 season … played his high school football at River Rouge High School for Corey Parker … Clemson recruiters were Brent Venables and Lemanski Hall … has three cousins who played or are still playing college football, Michael Ojemudia (Iowa), Mario Ojemudia (Michigan) and Ovie Oghoufo (Notre Dame) … committed to Clemson on June 15, 2018 … enrolled at Clemson in January 2019.
Personal: Born Oct. 13, 2001 … first name rhymes with juke; last name pronounced Oh-roh-roh-roh … majoring in sociology … completed a microinternship with Synnex in 2019.
Note: Tackle stats in the bio above reflect statistics from coaches film review. Tackle stats in the table below reflect those as awarded by gameday stat crews.