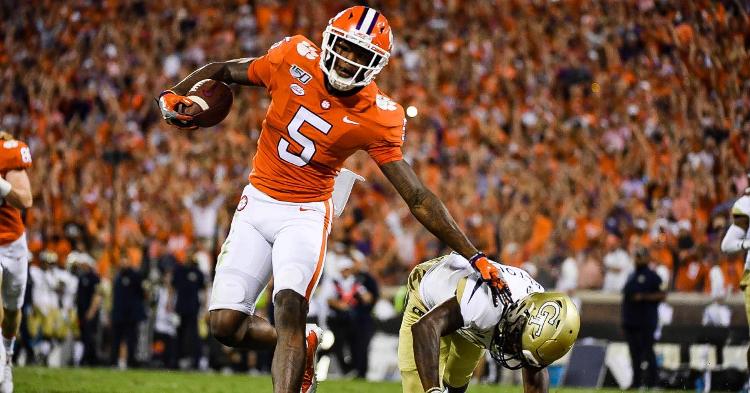 Tee Higgins has shined to start his junior season.

Clemson coach Dabo Swinney has said all you’re supposed to in matchup like his No. 1 Tigers have this week with Charlotte.

“This is a team that could embarrass us if we do not have a great week of preparation.” “This is the most explosive team we’ve played to this point.”

They’re also a team that is a 41-point underdog this week and has averaged a 41-point loss versus Power 5 programs over four seasons of playing them, giving a struggling Tennessee program the most trouble last year (14-3 loss in Tennessee).

The early profile for both teams shows top-10 units on offense (8) and defense (2) for Clemson according to the SP+ metric, while Charlotte boasts a top-50 offense (46) and one of the nation’s worst defenses (128):

For those reasons, the SP+ doesn’t equivocate at all in its prediction, giving the Tigers a 100 percent chance at coming away with a win Saturday, calling for a 55-8 victory.

Elsewhere, Football Outsiders' FEI pegs it as an over six-TD win (45.6 projected margin) -- and TeamRankings picks the Tigers, 52-12.

This Saturday will be a showcase in the kind of focus Clemson has shown in games like this and a chance to improve on those strong metrics thus far, while gaining experience across the board.

Same disclaimer as last week for Trevor Lawrence, it’s still early -- and that’s a parallel to watch with Justyn Ross and his start.

Why is it a story early? What he’s done with those extra looks.

Despite a big game versus Texas A&M in week two, Ross is averaging only 6.57 yards per target with a 57.7 percent catch rate. He made his surge toward the end of last season to more than double his current yards per target (13.9) with a 63.9 catch rate. He hasn’t always been helped by his QB at times on throws, but that hasn’t been a factor for teammate Tee Higgins early.

Like with Lawrence, you expect Ross to turn it around, but Higgins also deserves plenty of recognition for his start.

Bill Connelly’s advanced box score numbers show that much more how dominant an effort that was from Brent Venables’ group last week:

# The Orange were in the single-digits percentage-wise in success rate* throwing on passing downs (5%). It wasn’t a real successful night for either side there though, with Trevor Lawrence connecting 27 percent of the time for the needed yards with 6.9 yards per pass.

# Syracuse was held below a 20 percent success rate per play in the second (11) and third quarters (19).

# Syracuse was held to a 17 percent success rate on runs overall and were stuffed below an already low average in runs limited to the line of scrimmage or behind (26 percent; around 20 percent going in). Speaking of the running game, Lawrence continued to show his wheels with all four of his runs being successful for a total of 42 yards.