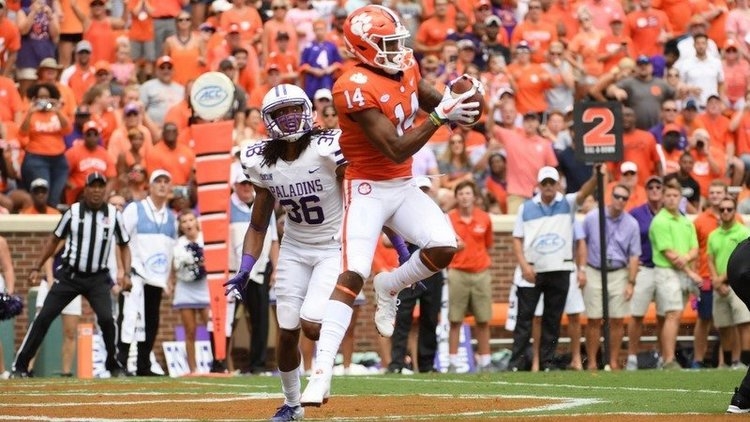 Diondre Overton has a chance to impress and state his case for more playing time in 2019.

We're analyzing where the Tigers stand going into spring by position with a stacked Clemson receiver corps next up:

(Senior starter Garrett Williams is expected to go into the military, per Clemson coach Dabo Swinney)

Who has the most prove this spring? Clemson returns a whole host of wide receiver talent this spring and that provides the most competitive position for the Tigers right now.

Overton, a senior, could carry the most intrigue down the depth chart this spring as he has shown glimpses of being a playmaker and could see some opportunity if Ross sees action outside of the boundary role. Three of Overton’s 14 catches were for touchdowns and he averaged 14.2 yards per on receptions overall last season.

It’s now or never for Overton to make a bigger impact as a Tiger and the competition won’t be any less fierce with the fast, lanky Ladson in to compete in spring ball to go with Higgins on the boundary. - Brandon Rink

Who steps in for Hunter Renfrow this season?: Yes, Hunter Renfrow is gone. He leaves Clemson as one of her favorite sons, a legend in his own time. The former walk-on caught the game-winning pass against Alabama in the title game a few years ago, cementing his legacy in Tiger lore. He will be missed, and so will Trevion Thompson, not only for their play on the field but their leadership off the field.

The Tigers will be just fine, however, with a plethora of playmakers comprising what is undoubtedly the deepest and most talented roster of wideouts in the country.

It starts with rising sophomore Ross, who torched Notre Dame and Alabama for 301 yards in the College Football Playoff. Perhaps the biggest question of the spring will center on where Ross will line up. He started last season as a backup to 9-man receiver Higgins, but the coaches moved Ross into the slot, especially later in the season. Putting Ross and Higgins on the field together created a matchup nightmare for defenses – do you double the outside guy? Do you double the slot? Pick your poison, defensive coordinators.

Waiting in the wings is rising sophomore Kendrick, who caught 15 passes for 210 yards in 2018. Overton, Chase and Powell (who redshirted last season) will also be back in 2019, along with veteran backups Will Swinney and Will Brown.

The Tigers also get a boost from the freshmen – Brannon Spector is a LOT better than people think. We’ve watched Spector in camp over the last three years, and he’s always impressed. That takes us to early enrollees Ladson and Ngata, a couple of 5-stars that are big plays waiting to happen.

Deep, talented, and experienced. Wide receivers coach Jeff Scott will have a lot of fun coaching this group in the spring. - David Hood

What's the outlook at tight end right now? Clemson’s tight end options will be limited during the spring.

Gone are graduates Milan Richard and Cannon Smith, and it’s expected that Garrett Williams will take his talents to the military. That leaves Braden Galloway (whose season eligibility is up in the air), JC Chalk, and talented freshman Jaelyn Lay.

Lay was the No. 165 player and 16th best player in the state of Georgia. At 6-6, he is the tallest tight end in Clemson history.

“Jaelyn had a good camp with us. He did a good job. He'll join us in January,” he said. “It will be a big opportunity for him to jump in there. The thing you don't know is when you put the pads on, what can he do? He has the skillset to really help. How much can he retain of the offense? How can he handle it physically? The only thing we need there is time to see whether he can do it.”