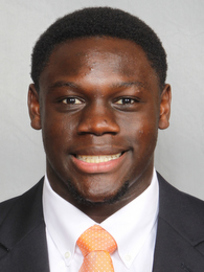 2018: Made season debut at Texas A&M … gained 26 yards on two receptions vs. Georgia Southern … caught one pass at Georgia Tech.

2015: Played special teams for the Tigers in every game, primarily on the kickoff return unit … saw the field for 13 snaps against Wofford … earned three snaps in win over Boston College … logged four snaps at Miami … returned two pooch kicks for a total of 28 yards, including one in the National Championship Game against Alabama.

Personal: His father, Bill (hurdles), and mother, Veronica (sprints), were both All-Americans in track at Georgia … his uncle, Herschel Walker, won the 1982 Heisman Trophy with Georgia … graduated Dec. 21, 2017 with a degree in communication … born Jan. 23, 1996.