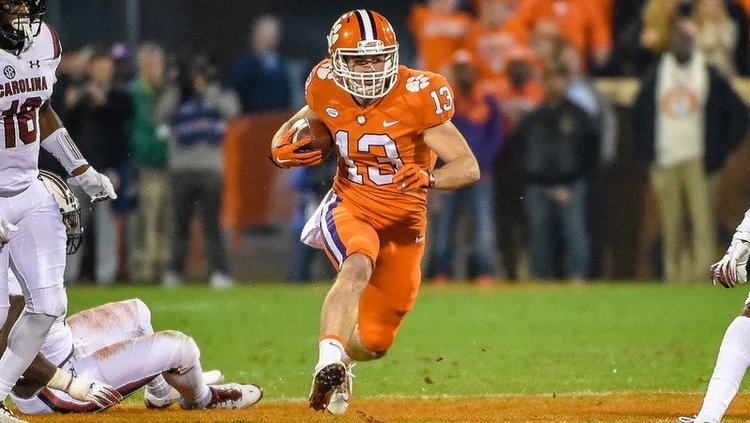 Hunter Renfrow may have to wait until Saturday for a NFL destination but his ability is undeniable.

Few folks who have followed college football over the past couple years will be unfamiliar with the name Hunter Renfrow.

This week's NFL draft is the start to showcase that name more on the professional level - and his numbers show he can be a steal for whoever ends up with the 5-10 target.

SB Nation profiled the 'sleepers' at the receiver position this year and Renfrow excelled in one particular area.

Inside the opponent's 40-yard line, Renfrow's efficiency rating leads all receivers in the draft, ranking far-and-away the best in catch rate (79.7; next nearest is Marquise Brown's 72.1) and pacing the group also in yards per target (9.7).

"I’m not even sure you can call Hunter Renfrow a sleeper at this point after his standout Senior Bowl performance," SB Nation's Bill Connelly writes, "but he’s still projected to go in the fourth round or so, so I say he qualifies.

"Either way, through his four seasons, Renfrow went from complementary possession man to All-American once Clemson started getting close to the end zone. He scored probably the most famous touchdown catch in Clemson history on a two-yard throw, after all."

Renfrow was projected to go in the sixth round by CBS Sports last week. The Athletic ($) projects a seventh-round selection to the Raiders.

Renfrow went from a walk-on role to tallying 47 starts with 186 career receptions for 2,133 yards and 15 touchdowns. He won the Burlsworth Trophy this past season for the most outstanding player to begin his career as a walk-on.

The NFL draft will be held in Nashville, Tennessee April 25-27 and broadcast on ESPN, ABC and NFL Network (8 p.m. on Thursday; 7 p.m. on Friday; noon on Saturday). Clemson is looking to break a record for draftees and would if all 11 NFL combine invitees are selected (record is 10). Clemson has had the most receivers of any school drafted since 2013 (7; LSU and Ohio State next with 6).