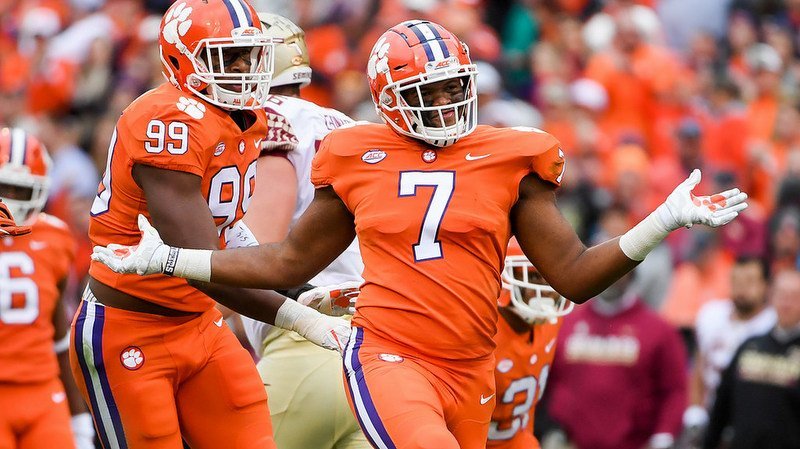 That catchphrase was made famous in the movie Poltergeist II: The Other Side, a movie about supernatural forces that come back to haunt a family despite a new house.

Opposing offenses might have some new pieces next season, but Clemson’s defense will be back to haunt quarterbacks and offensive coordinators across college football - Clelin Ferrell, Austin Bryant, Kendall Joseph and Mark Fields are all coming back for another year.

Ferrell will be a redshirt junior in 2018, while Bryant, Joseph and Fields will all be seniors. The defenders were part of a Clemson team that finished the regular season ranked No. 1 in the nation before falling to the eventual national championship-winning Alabama Crimson Tide in the Sugar Bowl.

Clemson's defense finished the 2017 season ranked second in the nation with 13.6 points allowed per game and finished fourth overall nationally in total defense, giving up just 276.6 yards per game. The return of the four defenders brings back 228 tackles, 41.5 tackles for loss and 18.5 sacks from last year just from those four. That includes the top returning sack leaders in Ferrell and Bryant.

Joseph, widely regarded as the quarterback of the defense, had 96 tackles, five tackles for loss, a half sack and one interception. Fields, who appeared in 11 games as a sophomore, was limited to just five games in 2017 because of injury, finishing with 15 tackles, two passes defended and no interceptions.

Defensive coordinator Brent Venables recently signed a bevy of standout defenders for the 2018 recruiting class, and a few of them are already on campus. Defensive ends K.J. Henry, Justin Mascoll and Xavier Thomas, defensive tackles Josh Belk and Darnell Jefferies, defensive back Kyler McMichael, and linebackers Jake Venables and Mike Jones as the cornerstones of the next great Clemson defense.

The return of Bryant and Ferrell not only ensure the Tigers have depth, but both defensive ends are considered team leaders with a strong work ethic. Now, those young defensive ends will have role models to watch for a year, and the value of that cant be overstated.

Venables has battled depth issues at that position for a few years as injuries have taken a toll, but will have the players already mentioned join Logan Rudolph, Richard Yeargin, Xavier Kelly and Justin Foster at the end spot. That kind of depth is enviable, and it belongs to arguably the best defensive coordinator in all of college football.

They’re baaaack, and it’s going to be a lot of fun watching them haunt opposing offenses next season.