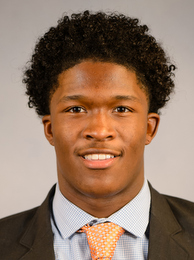 Wide Receiver
B I O
Wide receiver has made an impact his quickness in the open field ... has 78 career receptions for 723 yards and three touchdowns in 770 snaps over 26 games (six starts) ... also has 182 career punt return yards and 126 kickoff return yards.

2016: Tallied 49 receptions for 472 yards and two touchdowns in 455 snaps over 14 games (five starts) ... third on the team in receptions ... added 176 punt return yards on 21 attempts ... offensive player of the game by coaches after posting seven catches for 86 yards against Troy ... finished with 182 all-purpose yards after an outstanding punt return game ... returned one 75 yards in the win ... posted four catches for 60 yards and two touchdowns against SC State, while being named co-special teams player of the game with 56 punt return yards ... posted eight catches and went over the century mark (101 yards) for the first time in his college career at Georgia Tech ... named offensive player of the game by coaches in Atlanta ... missed game with Syracuse due to injury, but returned the following week against Pittsburgh ... had 24 receiving yards on three catches at Wake Forest ... had three catches for 32 yards against South Carolina ... had four grabs for 29 yards in Fiesta Bowl win over Ohio State.

2015: Sixth on the team with 29 receptions for 251 yards and a touchdown in 12 games (one start) ... had seven carries for 48 yards, as well as seven kickoff returns for 223 yards and a 31.9 average per return ... missed three games due to injury ... totaled game-high eight receptions in the opener against Wofford, most catches by any Tiger in history in his first game ... posted four catches for 29 yards at Louisville ... had three catches and also two carries against Georgia Tech ... posted four catches at Miami in 58-0 win ... scored first career touchdown on 34-yard pass at NC State ... suffered a knee sprain in win over Florida State ... missed games against Syracuse, Wake Forest and South Carolina with a knee sprain ... caught three passes for 27 yards in ACC Championship against North Carolina.