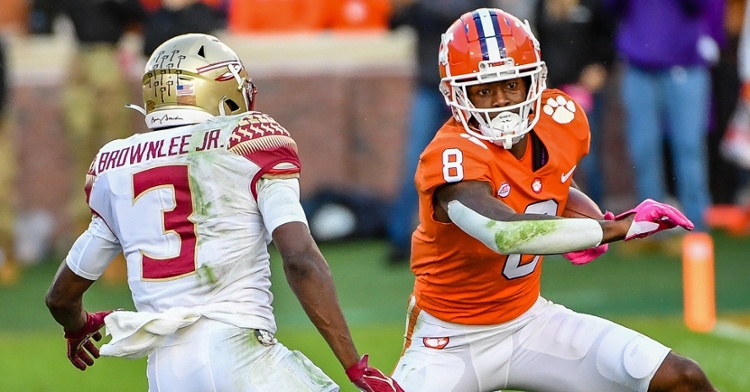 Justyn Ross looks for room on a screen pass Saturday.

CLEMSON – Clemson’s wide receiver screen game has been a hot topic since the screen calls from former offensive coordinator Rob Spence, with fans hating the throws that are either on the line of scrimmage or behind the line. To the coaches, a screen to the perimeter is a success if it gains four or more yards because they consider it an extension of the run game.

Offensive coordinator Tony Elliott responded to TigerNet’s questions about the screen game during Monday’s press conference, and he detailed the factors that go into having a successful screen game – blocking on the perimeter, having numbers, and even the body type of the receiver catching the ball.

Elliott admitted that with the offense suffering a rash of injuries to the receivers this season, he’s tried screens to just about every offensive player, including the tight ends. Against Florida State last Saturday, the Tigers completed 8-of-9 passes on screens for 25 yards, an average of 2.8 yards per attempt.

Those numbers are drastically different than 2019 and 2020 when Trevor Lawrence was throwing to players like Hunter Renfrow and Amari Rodgers. The Tigers averaged 7.8 yards per attempt in 2019 and 7.9 in 2020. However, in the preceding years going back to 2014, the averages were more in the range of five yards per attempt.

Part of the issue, as Elliott admits, there is no Sammy Watkins, Ray-Ray McCloud, Hunter Renfrow, or Artavis Scott able to split the defense with pure speed. That enables the defense to play more aggressive.

"Any of the behind-the-line screen, whether it's a spot screen or a bubble screen, it's an extension of the run game and you're trying to control box numbers,” Elliott told TigerNet. “Like against Sammy (Watkins), everyone was so scared of Sammy they were going to play 15 yards off Sammy so you could throw it out. there with no blocking and he's going to get yards. People now are a lot more aggressive and they're triggering on those things a lot faster.

“Early on (in the season), you had young guys out there not quite understanding the speed of the game so we missed several blocks. Amari Rodgers brought that back last year, but he's that unique guy like a Ray-Ray McCloud. Not every guy is going to have that short-area quickness where he can catch it and go 50."

Elliott said they’ve been using the available personnel in an effort to make the screen game work.

“We've been throwing screens to everybody just because of the personnel available. The expectation now is we throw it out there, go get four yards,” he said. “You get four yards and keep us ahead of the chains. I think sometimes you get greedy and want to have an explosive play but for where we are right now with everything going on, let's get what's there.

“Going forward, as we got that continuity and guys in certain spots-- J-Ross (Justyn Ross) is a guy really good at those screens but he was playing in the boundary where you don't have those opportunities. It's a myriad of things. The quarterback has to make the right decision. It's a balance. You're really just trying to control the defender to keep him out of the box, so you're not out-numbered."

I asked Elliott about those quick-twitch guys – most of the receivers on the roster are taller receivers – and he said the coaches have discussed addressing that in recruiting and adding multiple body types. He also said he thinks there are players on the current roster who would make great screen receivers.

“I think Brannon Spector was that guy (Out so far this season after having COVID earlier this year). EJ (Williams) just needs some work at it, I don't know how much he did it in the past, but he's got that twitch,” Elliott said. “That is something that we've discussed in recruiting, just making sure we have multiple body types to give us access to everything. If you watched over the years, we were always big into the boundary and big in the slot, and then small on the outside.

“Then Sammy kind of changed it, but here's only one Sammy. So then we went back to Artavis Scott and Ray-Ray at that position. Then Jeff (Scott) kind of evolved and wanted to be much bigger on the perimeter. You had Hunter Renfrow. I think Spec was the guy we were hoping, but we haven't had him back. Ross can do it, but during his opportunities (in the slot), we weren't quite where we needed to be from an understanding and technical standpoint because of youth. We're aware of the things we have to work on to improve there."