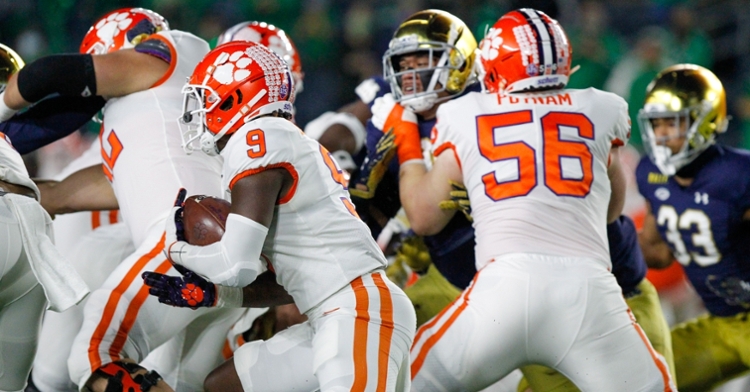 Clemson players say that while the loss to Notre Dame still stings, they are ready to use the open date to heal mentally and physically and move forward.

Clemson dropped its first regular-season game since 2017 in a double-OT defeat at now-No. 2 Notre Dame, 47-40. Several players met with the media Monday to discuss the loss, the open date, and other topics. This is part two of Monday’s interviews.

Part one can be found here, as Trevor Lawrence discusses his return from COVID.

*He said it was a great experience getting his first start at Notre Dame. Has watched some film with Coach Venables to go over what he did well and what he needs to work on, but wants to watch more film to get a true feel for how he played.

*He said he smiles every time he puts on the pads and sees his name on the back of the jersey. Loves to play the game, and he hopes he can be a part of the game plan and rotation going forward. He feels like he and the younger defensive players have proven they can be trusted.

*Putnam says the OL didn’t move people like they wanted to. Now they have time to reflect and work on things that maybe they didn’t do very well. He says the morale of the team is ok and losing hurts. Notre Dame is a good team and they hope to see them down the road.

*He says he is starting to pick up things, like picking up blitzers, and you learn from experience and from watching film. Putnam said there are little hints that you can pick up. As they looked at the film of the Notre Dame game, he said the most disappointing thing was not being able to move people off the ball like they wanted to. It really comes down to technique and hand placement and knowledge on how to anticipate movement.

*He understands there will be criticisms, but they are a tight-knit group and will be able to rally around each other.

*Rodgers said that he and Cornell Powell are pushing each other to be productive.

*Rodgers said it would have been easy for Powell to pack his bags and leave, but he stayed and his hard work is paying off.

*He said he has forgotten about the mistakes of the past, forgotten about Notre Dame, but they are moving on to next game. They will move on. Can’t sit back and dwell on that too long.

*Rodgers said they will learn from this game and move forward. They haven’t lost a lot since he’s been here, and says it’s “uncomfortable” but you have to learn from it and let it make you stronger. He is ready for the challenge the coaches will give them during the bye week and they will build off of that.

*Rodgers says that DJ did a phenomenal job replacing Lawrence. He said that they feel like they have two of the top ten and maybe two of the top five quarterbacks in the country. It was great to have Trevor Lawrence on the sidelines Saturday.

*Powell says all losses hurt, whether you lose by 99 or just one point. Lots of guys are hurting and they are ready to get back to the drawing board and get ready for next week.

*He says that preparation and consistency are the key for him. He said you win Saturday by competing and winning Monday thru Friday.

*Powell said as an athlete your confidence grows in the plays you make and he has been fortunate to make big plays lately. Credits the offensive line and the running backs in allowing him to have 1-on-1 matchups.

*Powell said everyone has to remember all of the NFL receivers he’s been on the roster with – from Tee Higgins to Hunter Renfrow to Ray-Ray McCloud to Deon Cain to Mike Williams and on down the line. He finally feels like he is coming into his own.