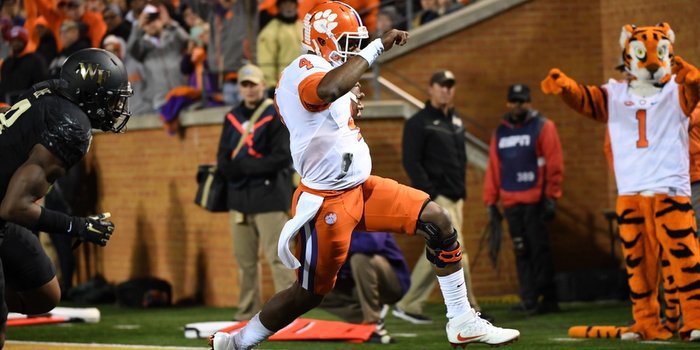 WINSTON-SALEM, NC – The Tigers have another banner to hang in Death Valley and an ACC Championship to play for in early December.

Oh, and welcome to rivalry week.

After suffering its first loss in nearly two years, many wondered how Clemson would respond, and Clemson head coach Dabo Swinney said Saturday's performance was indicative of the week they'd had in practice.

“Really proud of our football team. It was a long week. The biggest thing I’m proud of is how they responded. How they responded Sunday, Monday, Tuesday, Wednesday, all week and then obviously tonight. Wake Forest has got a tough team. This was a tough team to prepare for schematically with some of the things they do coverage wise. I’m just really proud of them. That’s all I can tell you. That’s what we talked about it all week, you have a little adversity. You hear this and you hear that, you got all this stuff. It’s about how the guys in that room, how they respond, how they think, what everything is about. They had a great week and bounced back.”

Wayne Gallman got his season back on track, carrying the ball 22 times for 161 yards and two touchdowns. Quarterback Deshaun Watson 23-of-33 for 202 yards and a touchdown, while Mike Williams had six receptions for 58 yards and a score. Watson also had seven carries for 47 yards as the Tigers rang up 254 yards on the ground.

Clemson won the Atlantic Division outright in 2009, 2011 and 2015. The Tigers tied for the title in 2012 with a 7-1 record with Florida State. But the Seminoles won the head to head tie breaker and went to the championship game.

The Tigers will play either Virginia Tech or North Carolina for the ACC title in Orlando, Fla., at Camping World Stadium on December 3rd. Clemson has 15 ACC Championships, tied with Florida State for the most in history. Overall Clemson has 21 conference championships (4 SIAA and 2 Southern Conference), more than any other school in the ACC.

Swinney said that this division championship isn't just a testament to this year's team, it's for the ones who came before them and laid the foundation.

“We played an outstanding game tonight. A very, very good complete football game. I’m just really proud of them. Division champs. That’s the fifth time in eight years. I’m just so thankful for not just this team but all the teams we had over the past eight years that helped us build a good foundation of consistency and excellence and everything that we do," Swinney said. "I’m just really proud. Our fourth opportunity to go play for the ACC Championship. Our seniors, this is a special group. First time ever back-to-back undefeated seasons on the road. In our five road games we have outscored the opponent 70-3 in the first quarter. First of all, the reason it’s never been done, back-to-back, it is because it’s really hard to win especially on the road. It’s pretty neat. 1903, 1970, 1948, 1981, 2015, and 2016, that’s a pretty neat to be a part of that.

“We’re led by a bunch of special seniors. Just thankful for them. They got their 45th win tonight. They got a chance to tie the all-time mark next week and break it in the championship game. Couldn’t happen to a better group. These guys have been unbelievable since day one. Just really proud of them. We have earned the opportunity to go to Orlando. A chance to win back-to-back titles. Certainly not going to be easy. We haven’t done that in Clemson for 28 years or so, it’s just awesome to have that opportunity. We look forward to competing in the championship game."

Next up for the Tigers is a date with arch-rival South Carolina next Saturday in Death Valley. Clemson has won two in a row in the series. South Carolina escaped Western Carolina Saturday afternoon to become bowl eligible in head coach Will Muschamp’s first season.

Clemson won the toss and deferred until the second half, and the strategy worked after Wake Forest ran three plays and punted. The Tigers took over at their 49, and three plays later faced a 4th-and-short at the Wake 42-yard line. Gallman ran off-tackle and went almost untouched into the endzone for a 7-0 lead. The carry put Gallman over 3,000 yards in his Clemson career.

The Tigers forced another Wake punt and scored on another short drive. Clemson took over at its own 41, and Watson faked a run then flipped a quick pass to Jordan Leggett over the middle for 32 yards. A few plays later Watson strolled in from three yards out and Clemson led 14-0 midway through the first quarter.

A little longer punt by Wake Forest on the ensuing possession forced Clemson to start at its own 32, but the result was the same. Nine plays later, Watson hit Mike Williams with a gorgeous throw over the shoulder to complete a 15-yard score, and Clemson led 21-0 late in the first quarter.

Another short punt gave Clemson another short field, and the result was another touchdown drive. The Tigers took over at their own 48, and Gallman’s 27-yard run set up Watson’s second touchdown run of the night, a two-yard score that gave the Tigers a 28-0 lead early in the second quarter.

Clemson forced yet another Wake punt, but Ray-Ray McCloud muffed the punt and it turned into a 42-yard field goal by Daniel Weaver. The Tigers put another nice drive together to answer, but misfired on a fourth down pass and Wake Forest answered with a short touchdown run that made it 28-10 with 3:31 to play in the first half.

In the meantime, Clemson’s offense went into a funk and turned it over on downs twice. One of those was to start the third quarter, and their second drive of the quarter was a punt after an ineffective series. The Demon Deacons started deep in their own territory, but two long runs and a 51-yard pass put Wake in position to score inside the Clemson 10. Clemson’s defense forced a 23-yard Weaver field goal and Clemson led 28-13 with 5:30 to play in the third quarter.

The Tigers got their wind back in the fourth quarter. Two sacks forced a Wake Forest punt - a punt that traveled 80 yards for a touchback with the wind – and the Tigers ran two plays before the end of the quarter. At the start of the fourth quarter, the Tigers relied heavily on Gallman, including Watson’s picking up a 4th-and-1 inside the Wake 30, and Gallman’s 19-yard run inside the Wake five. Two plays later Gallman crashed in from the one, and Clemson led 35-13 with 10:50 to play.