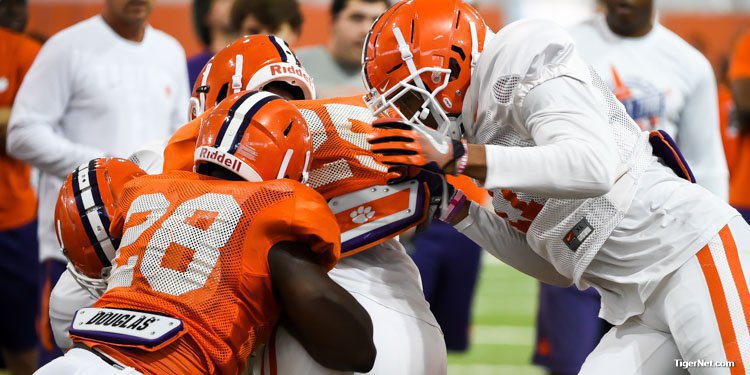 Tavien Feaster runs into a wall of tacklers Tuesday

CLEMSON – The best part of watching a Clemson football practice happens when the players line up for the PAW drill or Win drill and go man-on-man for supremacy. The PAW drill was the highlight of the start of Tuesday’s practice.

I’ll start with some quick observations – the drill didn’t last more than seven or eight minutes, but there were still some initial takeaways.

Tavien Feaster also looked good during the drill. He has so much speed and sometimes he hits the hole a little too fast, but once he learns a little patience he’s gonna be terrific. He’s another one that doesn’t mind the contact, and he was running people over today. Running through tackles and pushing the pile when he had to. Feaster also spent time at punt return and fielded everything clean.

Same goes for Adam Choice, who looks the best he’s looked since he has been at Clemson.

Now to the freshman, Travis Etienne. Etienne bounces everywhere when he’s walking, always on the balls of his feet. Elliott stood with Etienne and they watched the other running backs go through the drill, with Elliott providing constant feedback.

I wanted to see if Etienne retained his bounce when he hit the line, and he has no problem with driving off his feet and pushing the pile. He also proved on more than one occasion that he can slip through the smallest of holes and find daylight, maybe better than any of the other three. He has a quick sidestep that is electric. Will he redshirt? Clemson has some experienced guys ahead of him, but man, he is really good. He ran one play behind tackle Sean Pollard and slipped to daylight quick.

*Tanner Muse blew up one play, and he blew it up with authority, drawing a high five from Dabo Swinney. He single-handedly blew the play up, throwing offensive lineman Noah DeHond to the side and delivering a blow to Choice. Muse lost his helmet in the process. Muse's play drew a high-five from safeties coach Mickey Conn.

*Tight end Milan Richard was blocking with authority today. He was standing people up and playing as physical as I’ve ever seen him. Along with Pollard, I thought Zach Giella and John Simpson also stood out. Both of Clemson’s lines – offense and defense – are going to be nasty. Freshman Matt Bockhorst showed a nasty streak, and had to be pulled off of one defensive lineman. Justin Falcinelli went up against Christian Wilkins, and the two battled to a draw, if that’s possible in the paw drill.

*Another freshman stood out during the drill – defensive tackle Jordan Williams. He came in heavier than the coaches thought, and was moved to tackle (at 280 pounds). I wanted to see how he moved with the added weight, and he was noticeable during the drill. He’s strong.

*Wide receiver Ray-Ray McCloud was full-go at practice, and he fielded punts cleanly. He also worked with the corners.

*We watched special teams for a few minutes before the media was kicked out, and none of the punters really stood out to me. The best kicks were the rugby-style kicks the Tigers employed at the end of last season.