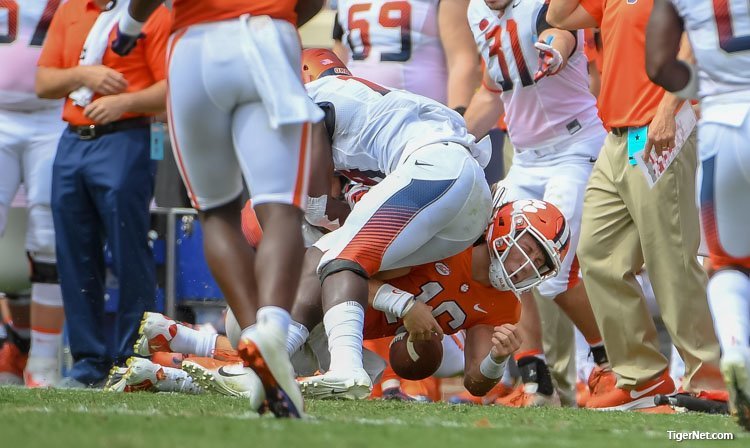 Trevor Lawrence was injured late in the first half Saturday

Lawrence was injured late in the first half of the 27-23 victory over Syracuse and didn’t play in the second half, but Swinney said Lawrence should be available against the Demon Deacons.

“Definitely expect him to play,” Swinney said during his Wednesday press conference. “That's why I put him back in practice last night and I don't see a reason why he wouldn't (play).”

Lawrence was put in concussion protocol, but the injury was more of a neck injury (cervical concussion).

“More of a neck issue. He got the crap knocked out of him. It was head and neck,” Swinney said. “He had some pain. They have a whole protocol on all of that stuff. You get put in concussion protocol for anything that creates a symptom. It's not something you mess with. And he wanted to come back in the second half and play. They did not feel comfortable putting him back in at that time. He came in and worked out Monday morning and looked good last night."

Swinney said Lawrence was “out of control” but will learn from the slide, or lack thereof.

“We run our quarterbacks. That's what we do. But yes, we coach them to be smart,” he said. “He is a young player. He was out of control. I love the effort, but there is a time for that and a time to live for another play. Because he can run and navigate the pocket well. It's one of his best attributes. He can extend plays, but that was a breakdown in the play. We didn't set the edge the way we needed to. He'll learn from it."

He then said that Lawrence played well before the injury.

"He played well, like 60-percent passing. He had a good game,” Swinney said. “He missed a couple of throws, maybe amped up a bit. We had the one screw-up on the exchange, which was costly. But he got good experience in getting that first start out of the way. He's in a good spot. It worked out in the end."

"I thought we really grew as a team Saturday. It was special to be a part of it. I love where they were last night, getting focused on a division challenge, another road game for us coming up. Just have to do everything that we can possibly do to get better and improve but to also play our best game and create confidence and momentum entering the halfway point of our season. This week is really critical in a lot of ways.

"Wake is 3-2. Dave Clawson has done a great job. They lost a one-score game to a really good Boston College team. They also lost to Notre Dame, who is one of the best teams in the country. They put 27 points up on Notre Dame. For them, they have one division loss so they don't want another one. And we know we get everyone's best effort.

"Offensively they're scoring 38 points per game, second in the conference. They rush for 244 yards a game. They're up-tempo, such as Syracuse. I don't know how to describe Wake Forest because they are so fast. I don't know how they get their plays in. Their quarterback is a baller. He will be a problem for a while. He is a tough competitor and has a good feel. They're very unique. It's like Georgia Tech, but with a different style. They're unique with how they run the action game. It's slow-developing. They have a million pop-passes. You have to have great discipline. They coach very well and their players understand where you're not fitting gaps properly. It's a big challenge.

"Defensively they've got Zeek Rodney from up in Rock Hill. He plays big. We remember him. There are some unknowns with them. They made a change at defensive coordinator a couple of weeks ago. Who knows what we'll see. Last week we didn't get to see a lot because they outmanned Rice. We'll have to make really good adjustments in this game. They're a good team. Dave has done a tremendous job. They have gotten better each year."