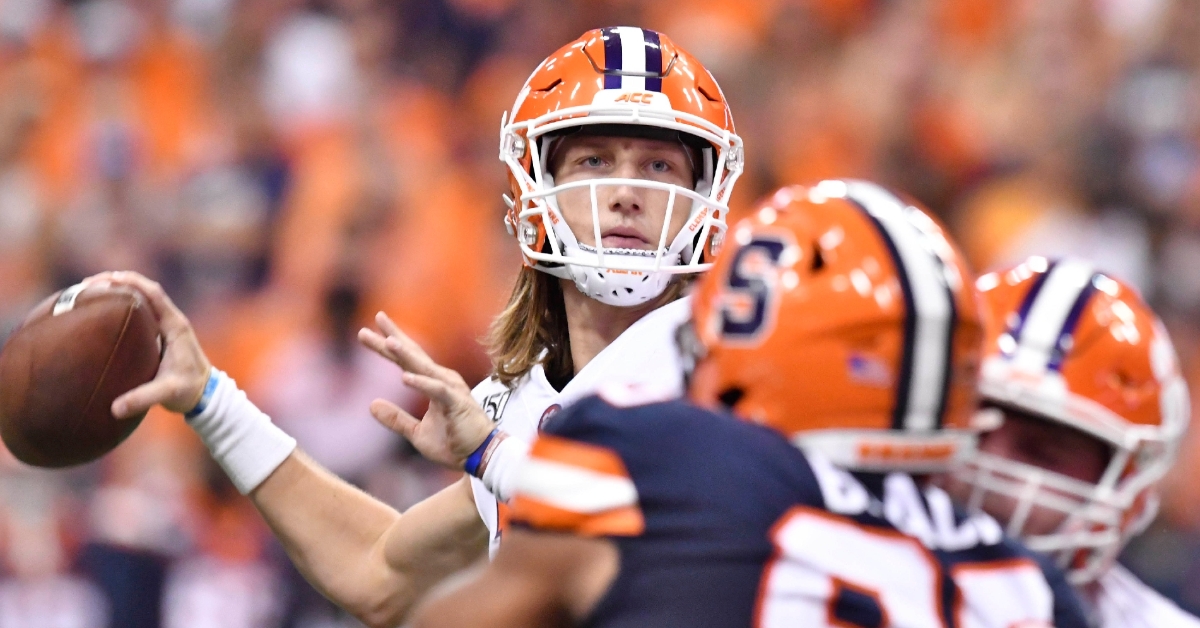 No. 1 Clemson exorcised its recent issues with Syracuse by pulling away to a 41-6 win on Saturday.

TigerNet tackles week three for the Tigers with the key takeaways and game grades.

What we know about Clemson football (week three)

* This was my fourth trip to The Dome, and for the first time it was both loud and hot.

The loud didn’t bother Clemson and neither did the heat, not a week after kicking off against Texas A&M under a high sun and 96-degree weather.

There are plenty of narratives coming out of the Syracuse game. The defense and its continued stellar play. The fact that another opposing punter looks like Ray Guy while Clemson’s punting game remains inconsistent. And then there’s the offense.

Quarterback Trevor Lawrence has thrown five interceptions this season, including two more against the Orange. The second interception was the biggest head-scratcher – Lawrence threw into underneath coverage and right into the waiting arms of a defender – and many began to wonder if Lawrence is pressing.

However, in postgame interviews, co-offensive coordinator Tony Elliott told us that on the first interception, Clemson’s receiver has to fight harder for the ball and help out his quarterback. There were several times Saturday where a few of the receivers didn’t seem to putting out max effort (everybody should watch Amari Rodgers and copy his intensity). Later, receiver Tee Higgins told us that the second interception was his fault because he ran the wrong route.

In other words, there’s always stuff the fans and the media don’t see. Yes, the offense can be better. Yes, Lawrence can be better. Even the playcalling can be better (I am a big fan of running the football). But as we lined up for postgame interviews and I was reading the chatter about the offense, three national writers stood talking about how dominant Clemson has been the first three weeks.

It’s true. The Tigers are 3-0, have outscored three Power 5 opponents by a score of 117-30 and aren’t even playing at peak efficiency. That’s a scary thought for opponents. - Nikki Hood

* Starting early in the second quarter, dejected Syracuse quarterback Tommy DeVito would head to the sidelines and walk over to head coach Dino Babers. Babers would remove his headset and put his arm around his quarterback and the two would spend more than a few minutes in conversation.

It was apparent that Babers was endeavoring to help his player work through what DeVito was seeing on the field, and it didn’t seem to work. After DeVito was punished on a fourth-down stop later in the game and hung his head on the walk to the sideline, a Syracuse media member sitting near me said, “I think Brent Venables just broke Tommy DeVito.”

Venables has been doing that a lot lately.

Venables molded his defense around a stout defensive line the last two seasons, but this season the strength of his group sits with the linebackers and secondary. And when you have a player like Isaiah Simmons roaming around, lining up all over the field, you use it to your advantage. On that fourth down play, DeVito looked and saw Simmons lined up deep and as he took his eyes off of Simmons, Simmons began a sprint towards the line of scrimmage. The ball was snapped and before DeVito could scan the field Simmons had him wrapped up and on the road.

It was that kind of night – DeVito was sacked eight times and hit several more times as Venables brought pressure for the middle, the outside, from safeties, from corners, from linebackers, from ends and from tackles. Watching the dominance of the Power Rangers the past two seasons was fun, but this somehow has a little extra juice to it.

* Clemson outgained Syracuse by 425 yards on Saturday. To put that in perspective, Swinney’s Tigers hadn’t had such a grip on the yardage battle since a 61-3 win over The Citadel in 2017 (446 yards).

On the offensive side, Clemson topped the 600-yard mark for the second time in three games this season and a fifth time since Lawrence took over at QB (612).

So why didn’t it quite feel like as a dominant an effort as the final box score tells?

Turnovers are certainly a major factor. Lawrence, adding two to his total on Saturday, has already thrown more interceptions in three games than he did in 15 as a freshman (5). He averaged a pick every 99 throws in 2018 and that number has jumped to one every 19 on the young season.

In last year’s 15-0 run, the Tigers barely averaged over a turnover per game (1.1) and had seven contests without one, while the 2019 campaign has featured a two a game average. Lawrence has taken more chances -- showing confidence his talented receiver corps -- with hits and misses. So far, the Clemson defense has performed on another level pressed to its goal line in response -- not giving up a score on three turnovers in the red zone. Those offensive mistakes haven’t hurt so far -- and probably won’t in the regular season -- but down the line somebody might do a lot better with the chances than Syracuse did.

Henry was disruptive in the backfield -- explosive off the snap -- with a pass breakup, half a sack and three tackles. Goodrich stepped in for Derion Kendrick and performed well under the spotlight -- in good position when targeted and finding himself in the right spot at the right time for a head-scratcher interception thrown by Devito.

Clemson’s defense still performing at the insane standard set under Venables’ leadership has been an early storyline and more young players stepping in like that will be a feature for those performances to continue. -- Brandon Rink

There were spectacular catches and plays from the likes of Justyn Ross, Amari Rodgers, Tee Higgins and Frank Ladson Jr. and strong runs from Travis Etienne and Lyn-J Dixon -- with Lawrence showing flashes of his talent along the way. If topping 600 yards and 40 points feels a little off, just imagine when this team really does hit its stride -- those teams in its path won’t have an answer.

Have you heard the one about Venables being a really, really, really good coach? He’s molded a talented yet largely young and inexperienced group and made them a force to be reckoned with.

There are a number of areas of the game to weigh when it comes to special teams but the punt game is an interesting area for Clemson. Will Spiers ranks 58th in yards per punt average (40.9) but the coverage unit has converged enough on his attempts that Clemson is one of nine teams nationally without any positive punt return yards given up yet (one return for zero yards). Overall, it was another solid effort from the Tigers special teams group on Saturday.