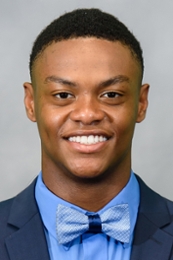 Cornerback
B I O


2020: Credited with 16 tackles, two interceptions, a fumble recovery and a pass breakup in 237 snaps over eight games (four starts) … unavailable at Wake Forest and vs. The Citadel … made two tackles in season debut vs. Virginia … broke up a pass against No. 7 Miami … added a tackle vs. Boston College … won ACC Defensive Back of the Week and team defensive player of the week after posting three tackles and two interceptions vs. Pitt, the first multi-interception game by a Clemson player since Cordrea Tankersley’s two-interception game against Virginia Tech in the 2016 ACC Championship Game … contributed two tackles and a fumble recovery at Virginia Tech … made five tackles in ACC Championship Game vs. No. 2 Notre Dame … added three tackles in Sugar Bowl vs. No. 3 Ohio State.


2019: Credited with 13 tackles (0.5 for loss) and two pass breakups in 205 snaps over 13 games … credited with a tackle vs. Georgia Tech … recorded two tackles vs. No. 12 Texas A&M … recorded his first career interception at Syracuse, seizing momentum by giving Clemson the ball back one play after a giveaway by Clemson’s offense … added a tackle vs. Charlotte and at North Carolina … broke up a pass vs. Boston College … posted two tackles at NC State … credited with two tackles (0.5 for loss) vs. Wake Forest … recorded four tackles at South Carolina … ACC Honor Roll selection.