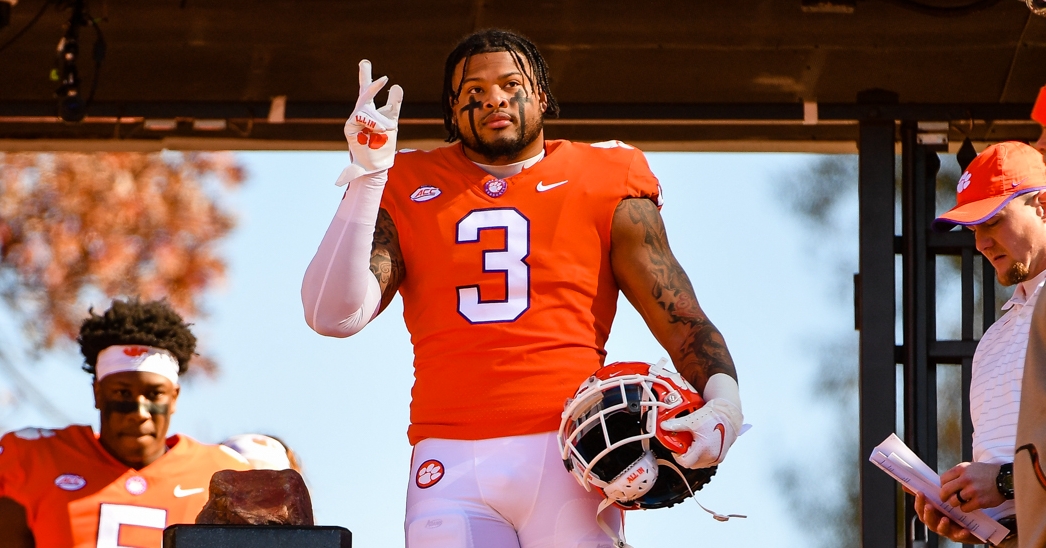 Xavier Thomas says no one has seen his full talent on display yet.

Another day closer to Clemson football's kickoff, the most important games and areas to improve have been identified – who are the key players to carry Clemson this season?

Looking at the defensive side of the ball first, Clemson loses two super-seniors and all that production from Playoff campaigns with linebacker James Skalski and safety Nolan Turner. All-totaled, the two logged over 4,000 combined snaps with 569 tackles (34 for loss) and seven interceptions (all from Turner). Another veteran from the linebacker group departs with two-year starter Baylon Spector as well, who logged 210 tackles (22 for loss) and nine sacks over 53 games (21 starts).

For a second consecutive season, the Tigers replace significant snaps on the corners as well. This time it’s both of the ACC’s first-team cornerbacks in Mario Goodrich and Andrew Booth Jr. Goodrich also garnered an All-American honor (PFF) while tallying 48 tackles, nine pass breakups and two interceptions last season. Booth posted a team-best three interceptions with five pass breakups before a second-round NFL draft selection by the Minnesota Vikings.

Taking a look at who Clemson is counting on defensively – and this is a tough list to cut to five players.

Jones, a fourth-year senior, is your Goodrich candidate this season of a player who’s seen the field but could put it all together when counted on as a starter.

His snap count and production has gone up each season, culminating last year in four pass breakups, an interception and 24 tackles in 415 snaps over 13 games last year.

The former unanimous 4-star prospect out of Norfolk, Virginia has totaled eight pass breakups, two picks and a fumble recovery over 855 snaps in 38 games.

Even if he doesn’t emerge as an All-American or All-ACC player this season, Jones is the lone senior among the cornerbacks and his leadership and ability to provide quality snaps when called on will be important in Mike Reed’s group.

Can the talented Texan (via Zimbabwe) avoid the dreaded sophomore slump?

Mukuba came in last season as one of the country’s top-rated safeties and won a rare starting role for the opener, becoming the first Clemson freshman defensive back to start game one in records going back to 1973. He went on to start 10 games, which was the most for a freshman since Mackensie Alexander in 2014 (13).

What he did do in that action? Only garnered freshman All-American honors from six different outlets and ACC defensive rooke of the year after tying the school freshman mark and leading the team in pass breakups (9) and ranking fifth on the team in tackles (54)

Mukuba is talking the talk of gearing up for a super sophomore campaign, with the stated goal of winning the Jim Thorpe Award for the nation’s top defensive back.

In the spring, he worked at cornerback and nickel to add to his inventory as an asset for Wes Goodwin’s defense. Mukuba told reporters that he prefers being closer to the line of scrimmage.

"I'd say nickel,” Mukuba said regarding his preferred spot. “It's more action down there in the box. It's fun playing strong (safety), don't get me wrong, but with my skill set and how I play, I feel like I play a lot better inside the box where I can tackle and cover the slot."

Wherever he ends up on a given series, Clemson needs that same playmaking success in 2022.

The defensive line has some of the best depth on the team, but when Thomas is on his game – opposing offenses are put on notice.

That was on full display in the Cheez-It Bowl with three QB pressures to harass Iowa State’s Brock Purdy.

Despite missing the South Carolina game and starting 10 total, Thomas led the team with 17 QB pressures for another top-10 defense.

After an All-American freshman campaign (10.5 TFL/3.5 sacks in 304 snaps), his game took a step back as a sophomore and then he had to redshirt in 2020 after bouts with illness (COVID and strep throat).

Another year with his legs under him and chasing QBs could make this season a big money year for the Palmetto State product.

“Nobody has seen what I am capable of, and that is what I really want to show this year,” Thomas said this spring. “Last year, I was coming off that terrible 2020 year, where I was overweight and things like that, but now I have a whole different level of confidence and things I want to do. So, I basically know everything I have to do. I have it all planned out. Now, I just have to go and get it.”

(In terms of the DE group, Myles Murphy is obviously one of the top-5 players on the defense, if this were that kind of ranking. His consistency over his first two seasons is expected and more, but Thomas maxing out his talent or close to it would take the defense to an even higher level).

There might not be a more anticipated Year 3 player on this group than Simpson.

He has already landed on a number of early projections for the 2023 NFL draft first round with a combination of skill and God-given talent that could prove him to be one of the most disruptive players in college football this season.

"He had some impressive 2021 tape, showing explosion at the snap and range when he needs to track a ball carrier," ESPN’s Mel Kiper said. "He could be an off-ball linebacker or play as a traditional 3-4 outside linebacker. Simpson has some power as a pass-rusher too."

He did fly under the radar for accolades, however, with no all-conference honors from the league or ACC media but being named second-team All-ACC by Pro Football Focus and third-team by Phil Steele. As Clemson’s lone returning starter in the LB corps, he won’t be ignored this year, and he will certainly be counted on to anchor an aggressive and talented rotation.

The No. 1-rated prospect for the 2020 class was a disruptive force as a freshman, tying for the team lead in QB pressures from that interior position over 12 games and 10 starts (11). He ranked third in tackles for loss (6.5) and second in sacks (4).

Working through a rotation last year, Clemson took a step back from its usual top-5 mark in tackles for loss, finishing outside the top-20 in TFLs per game (7.08; 23rd). If he’s back to 100% after knee surgery last fall (torn ACL), Bresee’s versatility to play inside or outside opens up all kinds of possibilities for Goodwin to scheme the Tigers into the opposing backfield.

There is depth on the interior with Tyler Davis a veteran stalwart and young talents in Ruke Orhorhoro, Etinosa Reuben and Tré Williams stepping up with Bresee out. Having that many capable players to plug in can keep Bresee fresh and ready to make plays in key situations.