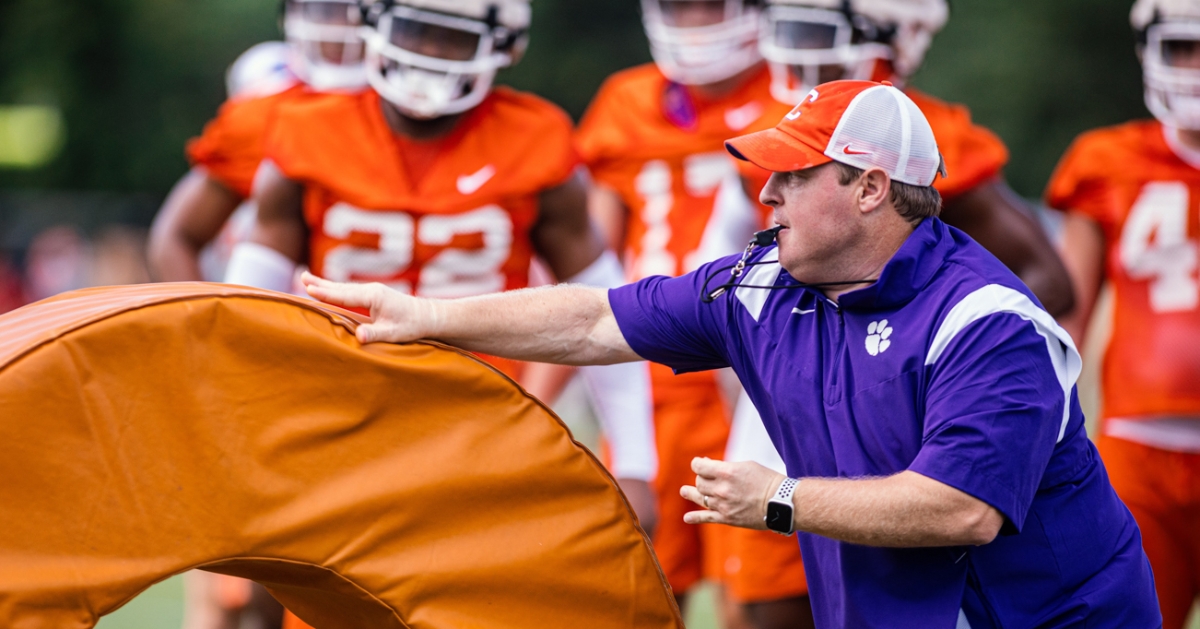 *Goodwin said he’s been pleased with camp to date.

“Been a great start to fall camp. Really pleased with the focus and energy of the first few days,” he said. “Definitely building and building and been great energy, great intensity, great focus, great, great leadership on our veterans from guys, our young guys have really picked up where they left off this summer and continued to get better and better every day.”

*Goodwin confirmed that defensive end Xavier Thomas will be out 4-6 weeks after Monday’s surgery for a broken toe.

“Unfortunate news with XT’s foot, out four to six weeks,” Goodwin said. “But the great news is he’s had a great camp, he’s in a great spot conditioning-wise. Unfortunate setback but he’s got the right mindset and will respond. Get him back early in the year.”

Goodwin said that he felt like he had a nice four-man rotation at defensive end with Thomas, KJ Henry, Justin Mascoll, and Myles Murphy. We asked who would be the next player to step into the rotation and he mentioned both Kevin Swint and Cade Denhoff.

“They've been really having a good camp. They've shown improvement and growth and I’m really excited where their game is at,” Goodwins aid. “They flashed Saturday during the scrimmage and Kevin had a great start improving his technique, just learning the position.

“Really pleased for where Cade is from that standpoint as well. I feel like this summer he really changed his body. From a physical standpoint, it's really improved his technique. So excited to see those two young guys and then Greg Williams after them.”

*Brandon Streeter continues to rave about the offensive line. He said that they are still trying to find the best five, and while Blake Miller is making a push to start at right tackle, a lot of that is contingent on Walker Parks getting comfortable at right guard. He said Parks is coming along but not there yet.

“I just felt like, especially in our running game, our offensive line did a really good job of really covering people up and being physical,” Goodwin said. “We’ve got some tough, tough guys up front and I just love coaching those guys because they have that mentality that you really want. So I would just start with the offensive line there on Saturday and say they really set the tempo. Did a good job of protections, had a couple of breakdowns and protections, but for the most part, man, they were dialed in and they did a good job of covering guys up.

“Blake has done a great job. He's really a smart kid. He's smart. He understands the big picture for being such a young guy and it's been special to watch him work. He doesn't say a whole lot, he just goes out there and gets it done and so it's really neat to watch him. And boys, he's tough. He's just a tough, hard nose guy that doesn't give away at all. Man, he's on top of it. He's had a great chance so far.”

*Streeter said it’s taking Dietrick Pennington a while to get back into the flow of the game. Pennington was pushing for major playing time a year ago and then tore his ACL in camp. He didn’t participate in spring drills, and Streeter said this is the first time in a year that Pennington has played football. He said it’s just going to take time for him to get to where they want him to be.

*Streeter said that backup quarterback Cade Klubnik has been fantastic and is pushing DJ Uiagalelei, but he also said there is no doubt that Uiagalelei is the starter.

“Right now, DJ is our starting quarterback. He's been solid this whole camp. He really has,” Streeter said. “He's moving so much better. He's just doing a great job of leadership. We talk about that all the time and these guys really want to follow him. And then Cade has done an awesome job. He's done nothing but just continues to get better and better and better. And so there's no doubt there's competition. I mean, there is definite competition. But DJ, man, he's the guy right now. I mean, he's our guy and he's got to stay consistent and keep playing and getting better, and that's what competition is about and that's what's making all those guys in my room better and better each day.”