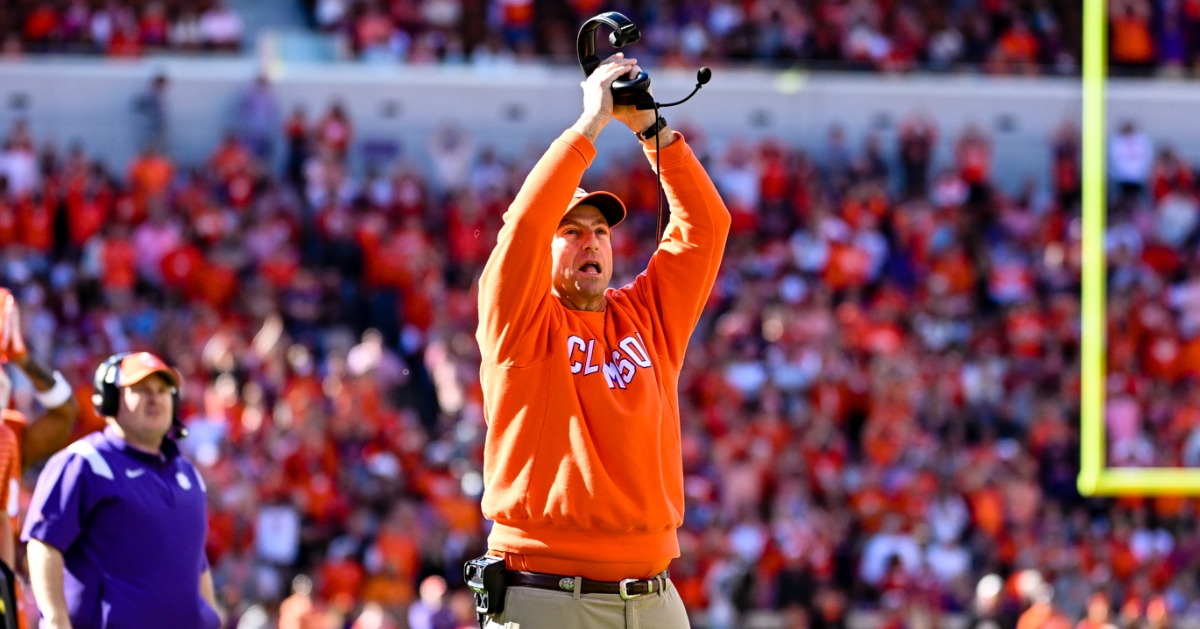 Clemson coach Dabo Swinney went into further detail of his thinking in sticking with DJ Uiagalelei as starting QB.

Clemson coach Dabo Swinney further expounded on his thinking with Clemson's QB situation and his own decision-making at this point on his call-in show Monday.

Swinney reiterated that DJ Uiagalelei will start Saturday in Charlotte against North Carolina, despite going 8-of-29 passing in the 31-30 loss to South Carolina last Saturday. Swinney said Uiagalelei has earned the right for that.

"I'm never going to compromise what I think is right. I'm just not going to ever do that," Swinney said. "I don't care what people say. I know what's right and I'm going to do what's right. Now, he's not done anything to not have the opportunity lead this 10-2 team to win an ACC Championship. Does he got to play well? Yep. You know, there's no room for error there. But he's shown that he'll respond. There's really not much more than that. And Cade (Klubnik) is a special, special talent. And you know, his time is coming. I think he's going to be a great one. I think he's going to be a star for us. Excited for that opportunity. He'll be ready for Saturday to go in there if we need him.

"Hopefully DJ will bounce back and play great and we'll all play better around him. We'll play better defense in the pass game and we'll take care of the ball on special teams and we'll catch it when we throw it and do the things that we need to do to win the game. There's really not much more than that."

Swinney went game-by-game in the process starting when Uiagalelei was pulled against Syracuse.

"The process is knowing reality. I know what the issues are -- not what some people think they are," Swinney said. "Sometimes everybody is on the same page. DJ, the reality is, he's had a good year. He's had a much better year. He's a great leader. He's really respected. He works incredibly hard. And he can really do it...His worst game was the Syracuse game. He did not play well, but at that point, he had won 14 in a row and Cade's coming -- but you're not going to bench a guy who's won 14 games in a row for ya. Cade went in and got some good experience and you go next week and (DJ) didn't play well at Notre Dame, but again, he wasn't the reason we lost. If it was, we would've made a change.

"That game was a disaster. We put Cade in and he threw a pick at the 5. So, we went into the next game, and alright, 'Here we are.' And he (DJ) played lights-out against Louisville and Miami. We got to get Cade in both of those games and he really played well. And again, he's (DJ) not the reason we lost the game. He's just not."

In regards to turning around the passing game, Swinney made some pointed comments about criticism.

"That's what I get paid to do, all I can tell you is I'm going to do my job," Swinney said. "If it comes a time where people don't like how I do my job, they can hire somebody else, but until then, I'm not going to make any decisions based on what other people what me to do -- I can tell you that. If I did that, I wouldn't be sitting here talking to you tonight, and the reality of it is we're a 10-2 football team playing for our league title and one of the most consistent teams in the country.

"Every year is different. Nobody has their head in the sand. We've got to get better in a lot of areas. We know that, but if we want to fire the head coach and fire the staff every year if we don't make the Playoff then you're going to have a new head coach here very often and you're going to have a new staff here every year because that ain't going to happen a lot. There's only four teams. If that's the mindset of Clemson, there will be a new head coach here and a new staff every year and it will be a very mediocre, inconsistent program. That's how I look at it.

"I get it. I know what my job is. There's nobody who works harder to represent Clemson and cares more about Clemson and the brand of Clemson than me -- I promise you that. Because I know where we've come from. I know where we've come from, and I know when we won that championship in 2011 and that hadn't happened in 20 years. Hadn't won 10 games in 20 years. And now we win 10 games and it's like nobody cares. You go to the ACC Championship and nobody cares. That's not true. A lot of vocal minority people don't care. But I ain't ever listen to those people and I ain't never going to listen to those people. I hear ya, but I'm going to keep doing my job.

"And again, I've got bosses. If they don't like how I do my job, they can send me out to pasture, but I'm going to show up every day and keep giving it everything I've got every single day as long as I've got breath in my body and I'm going to surround myself with people that I believe in because that's what we got here. We've got a bunch of great people and great kids that work their butt off to create the consistency that's so rare."