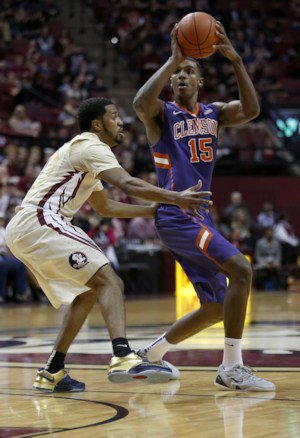 Grantham shot just 2-of-13 from the floor (Photo by Glenn Beil, USAT)

It was a tough day in Tallahassee for the Clemson basketball team.

Clemson’s big men battled foul trouble all afternoon and the Seminoles outscored Clemson 38-24 in the paint. The Seminoles also scored 18 fast break points while Clemson scored just two. Landry Nnoko had averaged 11 points per game over the previous six contests, and reached double figures in the scoring column in four of the six. However, he played just 18 minutes Saturday, scored just four points and was 2-of-5 from the free throw line.

The first eight minutes saw the teams trade baskets, and Clemson trailed 15-14 after a dunk by Blossomgame at the 11::45 mark. Clemson still trailed by one at 22-21 after a DeVoe layup with just over six minutes to play.

The Tigers then went into a five-minute scoring lull and the Tigers were forced to call a timeout after a layup by Dwayne Bacon gave the Seminoles a 31-23 lead with 2:44 to play in the half. However, Roper hit a big 3-pointer and a layup as Clemson scored five of the final six points of the half as FSU led 32-28 at the intermission.

FSU extended the lead to 36-30 early in the second half, but Clemson went on an 11-3 run and took its first lead since the first half on a tip-in by Sidy Djitte. The basket gave the Tigers a 41-39 at the 13:51 mark of second half.

Clemson’s big men got into serious foul trouble, however, and midway through the half Brownell turned to Josh Smith for minutes because Landry Nnoko (3), Sidy Djitte (4) and Legend Robertin (3) were all on the bench in foul trouble. It was also at that point that the Tigers began to turn the ball over, and a careless pass that turned into a dunk by the Seminoles forced Brownell to call a timeout with the ‘Noles leading 52-46 with just over nine minutes to play.

Nnoko was reinserted into the lineup and hit two quick free throws, but Florida St. took advantage of poor rebounding to get a put-back basket to make it 54-48, then used a blocked shot and a layup to extend the advantage to 56-48 with 7:42 remaining on the game clock. Nnoko was fouled after the timeout but shot an air ball on the front end of the one-and-one, and a turnover on the next offensive possession gave the Seminoles a 10-point lead with 6:45 to play.

At that point, the teams were headed in opposite directions – Clemson went into another three-minute scoring drought while Florida St. hit 9-of-11 shots in extending the lead to 60-48. Djitte stopped the drought with two free throws that made it 60-50. Blossomgame hit a 3-pointer on the next offensive possession and Florida St. called a timeout leading 62-53 with 4:37 remaining.

The Tigers were never able to close the distance and the Seminoles held on for the win.

Clemson stays on the road over the next week, playing at Wake Forest Tuesday night and at Virginia Tech next Saturday.

Clemson vs FSU Boxscore
Get the All-New Clemson Nike Shoe before it sells out!
Comment on this story