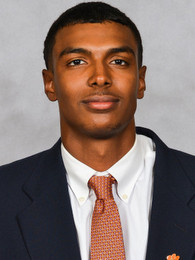 Forward
B I O
Signed in the fall of 2013 with Gabe DeVoe, both of whom were top-150 prospects ... came to Clemson after one prep school season at Hargrave Military Academy (Chatham, Va.) ... Hargrave has sent countless players to the Atlantic Coast Conference, including several who went on to play in the NBA ... played at Martinsburg High School in West Virginia and graduated in 2013 after highly decorated playing career ... played point guard until he hit a growth spurt in high school ... has started 94 of 95 career games ... has 831 points and 411 rebounds to his credit ... active team leader with 135 career three-pointers heading into his senior season ... in 2014-15, logged the most minutes by a Clemson rookie since Trevor Booker (2006-07) ... first Tiger to start every game of his freshman and sophomore season since Booker, now with the NBA's Brooklyn Nets ... increased scoring output as a sophomore to rank second on the team in double figures ... earned team's Tiger Strength Award in 2016 due to his commitment in the weight room ... switched jersey number from 15 to 32 for his senior season ... recruited by assistant coach Steve Smith ... majoring in community recreation, camp & sport management.

BEST GAMES, 2016-17
Top game of the season came in the Tire Pros Invitational against a top-10 Xavier team ... posted season-high 21 points, to go along with four assists and four steals in 35 minutes of play ... made 7-15 field goals and 4-4 at the free throw line versus the Musketeers ... posted 12 points, eight rebounds and four assists in win over Davidson in same tournament ... notched 13 points and five rebounds against High Point ... posted 19 points and six rebounds in win over Mercer ... had 13 points to go along with six offensive rebounds against SC State ... notched first career double-double with 11 points and 10 rebounds in comeback win at Wake Forest to open ACC play ... tallied 11 in loss to Louisville and 15 against Virginia Tech ... also posted 11 points in win over Georgia Tech at home ... scored 10 points in one-point loss to Syracuse, including a clutch jumper late before the game-clinching three by the Orange.

Started all 31 games at small forward, averaging 32.6 minutes per contest ... averaged 10.2 points per game, second on the team behind Jaron Blossomgame ... fourth on the team with 4.1 rebounds per game ... increased his three-point shooting dramatically to 35.4 percent and led the Tigers with 56 threes ... shot team-best 84.6 percent from the free throw line ... third on the team with 72 assists, compared to just 44 turnovers ... third on the team with 31 steals ... scored double figures in 16 games, tied for second on the team ... reached double figures in 10 of Clemson's 18 ACC regular season games ... made at least one three-point goal in 26 games, with a long streak of nine games to end the season.

Had a pair of 22-point performances during the non-conference schedule, first against UTSA and then three games later against Rutgers ... made 9-13 shots in the win over the Scarlet Knights, including all nine of his two-point attempts ... posted 16 points against South Carolina and was 4-9 from three-point range ... notched 11 points and seven assists in ACC home opener against Florida State, a win ... posted 12 points in win over Louisville and was 4-6 from three ... big impact in the upset over Duke that followed, he was 3-6 from long distance and 6-13 overall in contributing 16 points against the Blue Devils ... posted 14 in win over Miami on January 16, making 5-9 shots ... scored 15 points at Wake Forest, including a 9-10 performance at the free throw line ... posted 11 points at Virginia Tech and was 6-6 from the stripe ... scored 15 points and added seven rebounds against Notre Dame, when he was 4-6 from long range ... posted 10 points and seven rebounds in win over Boston College at home ... also played well at Boston College, scoring 13 points with eight rebounds ... posted 16 points at Georgia Tech on February 23 and hit a big game-tying three in the final seconds ... made 4-8 threes in that game, with four assists and two steals ... posted seven assists at NC State, with three steals.

Best Games, 2014-15
Top performance was 16 points on 6-12 shooting in a win over Syracuse on Jan. 17 ... made season-high 4-8 three-pointers ... scored 14 points in upset of top-25 Arkansas team; made 6-13 field goals versus the Razorbacks ... added five rebounds in 39 minutes ... scored 13 points and added four rebounds and three assists in neutral site win over LSU ... scored 13 and added seven rebounds against Winthrop on Nov. 17 ... posted 13 points and made 6-12 field goals, with four assists, in win over Robert Morris ... posted 13 points in 30 minutes, with seven rebounds, against Wake Forest on Jan. 24 ... made 5-10 shots at Florida State and scored 13, helping Tigers to a big road win ... notched 12 points and eight boards against Oakland ... posted 12 in home loss to NC State ... scored 11 points against High Point and 10 versus Rutgers ... tallied four blocks and four steals in win over Auburn, only the eighth time in Clemson history a Tiger player posted four of each ... scored nine points at Pittsburgh, on 3-6 three-point shooting, in big win over the Panthers ... notched eight points and five rebounds against Virginia Tech ... finished the year with six points and season-high seven assists against Florida State in the ACC Tournament.

Before Clemson
Rated the nation's No. 75 prospect by Rivals.com and No. 91 by Scout.com ... four-star prospect by both services ... played 2013-14 postgraduate season at Hargrave and averaged 24.3 points, 9.7 rebounds and 2.4 steals per game ... shot 56 percent from the field, including 43 percent from three-point range ... also shot 83 percent on free throws in leading Hargrave to a 32-8 final record ... posted season-high 52 points and 17 rebounds in the same game ... also scored 42 points in a game after making 11 three-point goals ... named Prep Player of the Year for the state of Virginia in 2014 ... earned the 2013 Evans Award, presented annually to West Virginia's boys basketball player of the year ... averaged 18.3 points and 9.1 rebounds per game and led Martinsburg to AAA state championship ... posted 20 points and 17 rebounds in the championship final against Woodrow Wilson High ... added 54 steals, 44 assists and 46 blocked shots his senior season ... 3A first-team all-state his junior and senior seasons ... averaged 17 points and 10 rebounds per game as a junior in 2011-12 ... finished his high school career with over 1,000 points and 600 rebounds ... signed with Clemson over scholarship offers from several outstanding schools, but ultimately picked the Tigers over Michigan in the end ... coached by A.W. Hamilton at Hargrave and Dave Rogers at Martinsburg ... born Mar. 19, 1995.