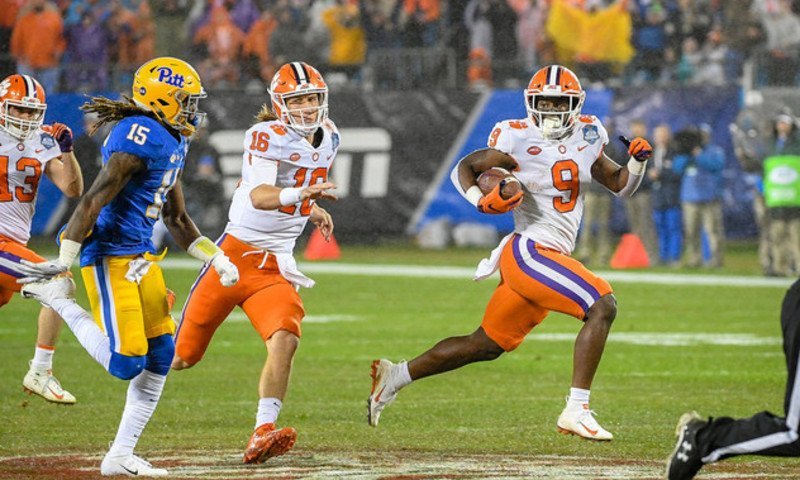 Lawrence and Etienne are just two of the Tigers' many playmakers

Luckily, the Tigers and Lawrence don’t have to wait long to find out – Clemson opens the season Thursday night at 8 p.m. against Georgia Tech.

How good can the offense be?

“We want to be the best offense in the country. Not saying we are right now, we don’t really know,” Lawrence said Monday. “We haven’t really seen much football. We know we can get better so that is one of our goals and I think we have the talent to do that. So whether or not we do all of the things to achieve all of that is one thing but we definitely have the talent. And just our whole offense is a lot of experienced guys and we are pretty deep so we have a good offense.”

“I’m really excited. It hadn't been a while since we’ve been practicing and working for a long time, but it’s going to be nice to play against some people that aren’t our own team,” Lawrence said. “You know, camp is just going against your guys everyday which makes us a lot better but it's going to be nice to channel that and go against a different team.

Lawrence not only has the veterans to throw to, but he also has the newcomers.

“Joe and Frank, and then we got Brannon (Spector). There’s a lot of guys, we got a new tight end Davis (Allen) and Jaelyn Lay,” Lawrence said. “So we have a lot of new guys that are great players and they are going to help us this year so it’s definitely been awesome to have them here. But we have so many good playmakers it’s nice being the quarterback and having options.”

“Just his work ethic. He’s always one of the last ones out here and even when he first got here he was like that,” Lawrence said. “He just wanted to learn, he’s really smart. And obviously you can just look at him and tell his body is a lot more mature than most people his age, so he’s been great. He’s picked up on the offense quickly and he’s been learning it all so I am excited to see him this year and see how he does.”

The coaching staff wants to use the running backs in the passing game more this season. Etienne struggled to catch the football last season but has worked hard on that part of his game.

“Yeah, with Travis, I think like in camp for half the practice we have been throwing and getting some routes and just working on his hands a little bit,” Lawrence said. “He’s done a great job of really coming to me and saying, 'Hey let’s get some throws after practice,' or whatever it may be and he’s worked really hard at that and has done a great job.”