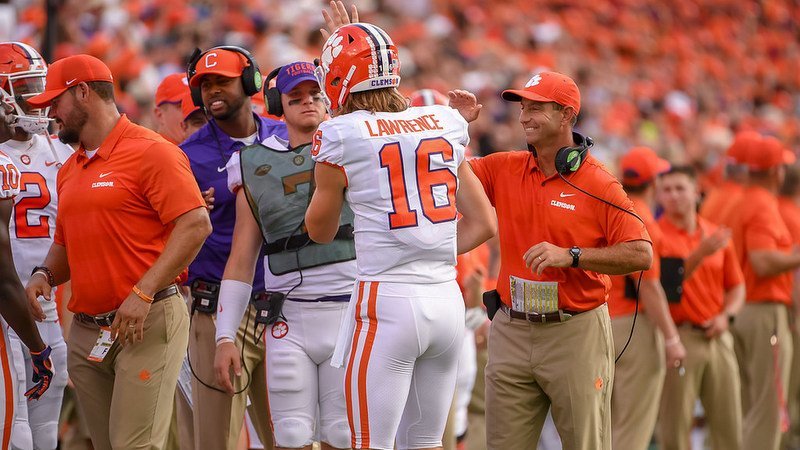 Trevor Lawrence gets a high-five from Dabo Swinney

Clemson head coach Dabo Swinney isn’t ready to name a starter for next Saturday’s noon home game against Syracuse but did say that freshman quarterback Trevor Lawrence had his best game as a Tiger in Saturday’s 49-21 win at Georgia Tech.

Swinney held his weekly Sunday night teleconference with the media and didn’t wait long to inform everybody that nothing in regards to the quarterback situation will be released tonight.

"I know everyone is going to ask about quarterbacks,” Swinney said. “I'm not going to address any of that tonight. Our players are off today. If anything changes, Y'all will know about it. I won't get into any rotation or depth chart moves tonight."

"The biggest thing is there are some footwork things in the run game that he can clean up,” Swinney said. “He really played well. Certainly, his best game so far. He was very poised. The game has slowed down for him. He's making good decisions. He made a nice check on the touchdown to Hunter Renfrow. He made some beautiful throws and then he missed one there. Just some technical things he can clean up. But he managed the pocket well. He's accurate. He took advantage of what I call some layups, things that are built into the run game. He did a lot of good things, for sure. Definitely still room for improvement. Every week is a season of its own. But definitely his best game. Six drives and he had five touchdowns."

The Tigers played well on both sides of the ball in the 28-point win.

"Really proud of our team. I think we played our best game yesterday,” Swinney said. “That's really what our goal was ... to kind of put it all together and I think we did that. We played with more detail. I just loved the focus of our team and the confidence that we played with. We grew up a little bit. That's two big wins on the road for us. I'm happy for our guys, especially our seniors. That's four in a row versus Georgia Tech. The work that was done in the trenches. This was a team leading the nation in rushing and we've out-rushed them four years in a row. That's a credit to our lines getting the job done.

"Defensively we held them to 2.6 yards a carry. We averaged 6.9 yards a carry. We talked all week about an opportunity to score on defense. We were able to do that. We were able to be disruptive. We had 10 tackles for loss and four sacks. They had over 70 yards in negative plays. They had eight fumbles and we only got one of them, so that was one negative that stands out. We missed some opportunities there. We dropped an interception, too. They did have three touchdowns in the red zone.”

The Tigers have been more explosive this season.

"Offensively it was our best game, most explosive. The one constant in our four games is the worst stat last year and that's explosiveness,” Swinney said. “But we've been consistent. We've averaged seven yards or more per play. The records go all the way back to 1938. This speaks to the explosiveness we've had. We have done a better job there for sure. We had over 480 yards. We rushed for 248 yards. We were very good on third down and 100-percent in the red zone. I'm so pleased with our running backs. They're doing a great job for us especially with yards after contact. You see Tavien Feaster coming back and Travis Etienne has had back to back 100-yard games.”

“We'll meet in the morning. We're very hopeful about Kendall Joseph and expect him to be able to go."

"We found out Kendall wasn't going to be able to go. We've got four games with Skalski. He's very smart, capable and sharp. He has played against them. But yes, if we can red-shirt him, we will. We reserve the right to change our mind on that, though."

Where is his team after four games

"We're coming off our best game. I like the focus, confidence and even the swagger. I sense some momentum building in them. I was very encouraged with them. I challenged them last week because every game is a season of its own. We have to critique and evaluate and encourage. I didn't feel like we were taking full advantage of some things last week. There were too many little things we weren't taking care of as a team. We took a big step forward yesterday. Hopefully that will continue. Syracuse is a team that will be very confident. We have a lot to prove this week."