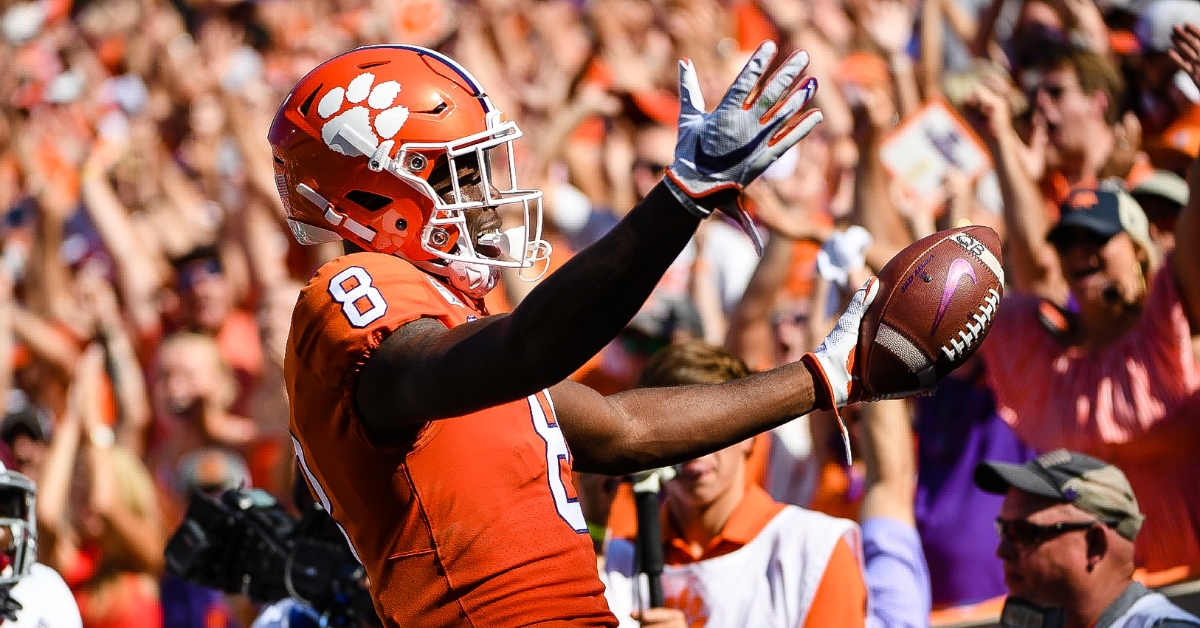 Justyn Ross likely slides into the 9-man (or boundary) spot this spring.

Clemson’s wide receivers face a transition this season, in more ways than one. Gone is former wide receivers coach Jeff Scott, who is now the head coach at USF. Taking his place is former Clemson receiver Tyler Grisham, who also spent time in the NFL.

Also gone are two veterans in Tee Higgins and Diondre Overton, while TJ Chase took his talents to Florida Atlantic. Higgins has been the main playmaker over the last two seasons, and he’s been a touchdown machine. Higgins had the ability to take a catch and turn into a long gain, or beat a defender down the field or make the play on the sideline.

Who steps into the spot vacated by Tee Higgins?

Ross gets the first crack at the vaunted 9-man spot made famous by guys like Higgins, DeAndre Hopkins, Sammy Watkins and Mike Williams. Ross played the 2-man spot last season and will likely see time at both spots this spring. Joseph Ngata and Frank Ladson walked onto campus last fall and expectations went through the roof because the coaches compared them to players like Hopkins and Watkins. People wondered if they would have a freshman season like Ross put forth in 2018, but it never materialized. Part of that was the schedule – Clemson jumped out to early leads and ran the ball much of the second half – and part of it was the fact that there were some really good players in front of them.

They all get a chance to shine this spring.

After deciding not to transfer, Diondre Overton made the most of his senior year. Can Cornell Powell do the same?

Powell enters his senior season with 40 career receptions for 329 yards and three touchdowns over 577 career snaps in 42 games. He has also posted seven kickoff returns for 182 yards, a far cry from the expectations everyone had for the former 4-star coming out of high school. He was rated as the No. 36 player in the nation by Rivals and the No. 4 player in the state of North Carolina. He played two seasons with modest success – 20 receptions over two seasons – and then redshirted in 2018. He played in four games and recorded 65 snaps in 2018 before deciding to take the redshirt. He had a career-high 15 receptions last season.

This season is his time to shine. He has experience and provides veteran leadership for a young group of receivers. Whatever he gives the coaches will be a plus.

What is next for Ross?

Stats are a funny thing. I read where one national writer said Ross had a down season in 2018. The truth is, he had 20 more receptions (66-46) in 2019 than in 2018 while recording one less touchdown (9 to 8). The difference was in his yards per catch, down from 21.74 in 2018 to 13.11 last season. Teams made a conscious effort to keep Clemson from taking the top off of their defenses and made the Tigers drive down the field. He was also banged up at the end of last season.

This year, he will be the man in the Clemson offense. He has been more of a straight-line receiver during his time on campus, and it’s time to expand the arsenal. He moved to the boundary (or 9-man spot) after Higgins was hurt in the Fiesta Bowl, and he showed that he has plenty of room to grow at that spot.