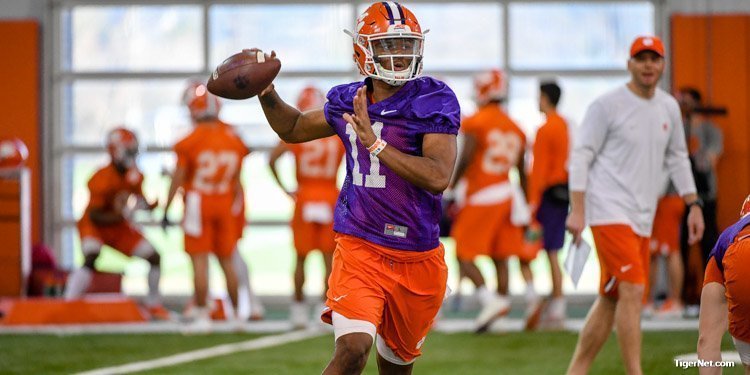 CLEMSON – It’s a steak and lobster kind of day in Clemson.

The 2018 National Champions returned to the practice field Tuesday afternoon, the first spring practice of the 2019 season. There were the usual faces and names and several talented newcomers. We were allowed to watch the first 50 minutes or so of the session and have a ton of observations to bring your way.

Famed restaurateur Jeff Ruby was in attendance, and he was noticeable from the outset – black cowboy hat, black monogrammed cowboy boots and a black duster with his name written on the lapels. What is he doing in Clemson? He is providing the meal for tonight’s 3.0 Dinner, which is held to celebrate the 60-plus players that achieved a 3.0 last semester. On the menu is the aforementioned steak and lobster. What do the other players get to eat? Well, they get something brought in and will have to watch their brethren eat a bit better.

Now, on to what we saw and heard.

*The team does a set of calisthenics to kick off each practice session, and we are used to seeing guys like Clelin Ferrell and Christian Wilkins called on the lead the set. Today, it was safety K’Von Wallace, who figures to take on more of a leadership role.

I also saw offensive lineman Sean Pollard guiding some of the freshmen through drills.

*Trevor Lawrence looks like he’s added good weight just since we saw him at the beginning of January.

*Kaleb Boateng, Will Putnam, and Hunter Rayburn took part in the offensive line drills. I really like the way Rayburn moves his feet, and you can tell Putnam is a technician. He’s also a technician with an attitude. The first thing I noticed about Boateng were his hands – he has a quick punch and seems to get them out in front quickly.

*ESPN’s Marty Smith is in town to do a feature on the Tigers, and when I asked him his angle he laughed and said, “It’s all about Sunshine, Sunshine, and more Sunshine.” Yep, in case you didn’t know, Trevor Lawrence is a hot commodity.

*Quarterback Taisun Phommachanh looks a lot like Deshaun Watson from the side. His throwing motion is a little different, but you can see the arm talent. He moves well in the pocket and didn’t look lost in drills. He stands tall in the pocket but also throws well on the run.

*Members of the Michigan St. coaching staff were in attendance.

*Freshman safety Ray Thornton was the only player in a yellow non-contact jersey.

*Despite tight end Braden Galloway’s uncertain future due to the ostarine investigation, he was full of energy and eager to begin practice. The thing that jumped out to me the most was his leadership. He quickly took freshman Jaelyn Lay under his wing showing him the ropes and leading him through drills.

Speaking of Lay…He may be one of the most physically impressive freshmen I’ve ever seen. He definitely looks the part of, so it will be interesting to see if he can pick up the nuances of the position.

*Defensive end K.J. Henry, who elected to redshirt last season, was having a lot of fun on the field. The redshirt year and the time in Joey Batson’s Power Hour did him served him well. He added muscle and was explosive coming out of his stance.

The other redshirt freshman end, Justin Mascoll, will also be a player on this year’s line. He is quick and his motor never stops.

*Lannden Zanders – the freshman safety out of Shelby (NC) is tall, rangy, smooth and incredibly athletic. His change of direction may be the smoothest I’ve ever seen from a freshman. He also has no problem going up and high pointing the ball.

Safeties coach Mickey Conn hit on Zanders and 5-star Andrew Booth, who is also athletic and finds the ball well in the air.

*At corner, Mike Reed might have his most impressive group to date. It seems like things may be starting to click for LeAnthony Williams. Kyler McMichael and Mario Goodrich appear to have taken another step and don’t count out Brian Dawkins, Jr. just yet.