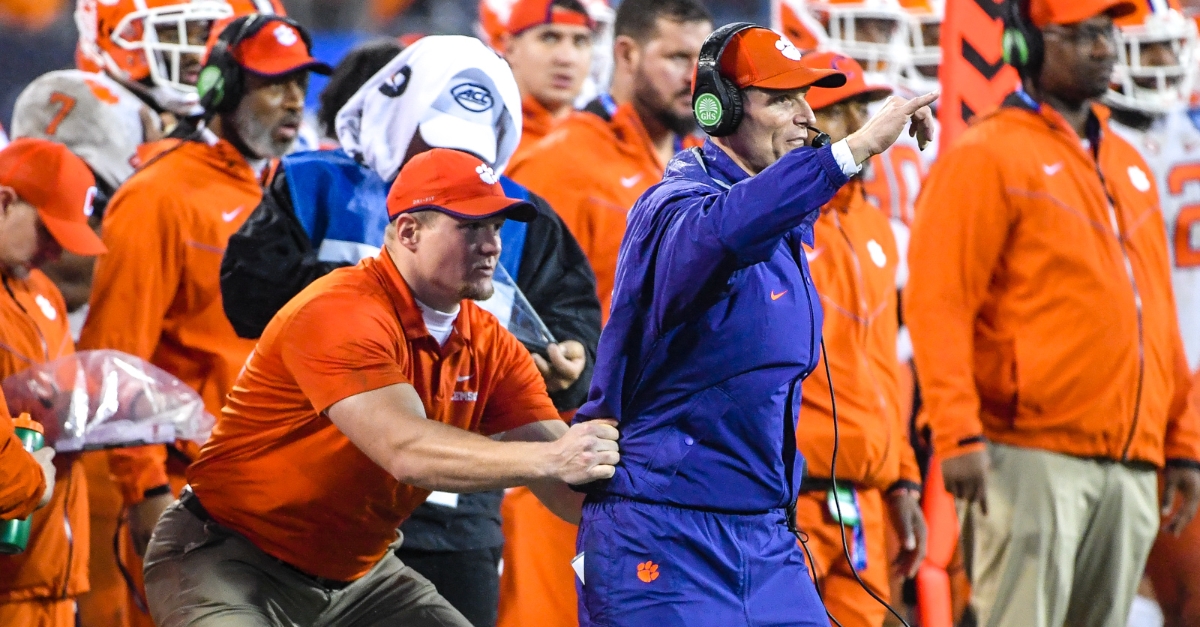 Brent Venables' defense is loaded in 2020

Let’s take a look at the defensive outlook, courtesy of the Clemson Football Media Guide:

Under the guidance of Defensive Coordinator Brent Venables, entering his ninth season at Clemson, the Tigers have staked their claim as one of the nation’s top units on an annual basis. In the six-year College Football Playoff era, Clemson has finished in the top 10 in the nation in total defense each year, the only program in the country able to make that claim. Clemson’s defense opened the 2019 season with one of the most impressive stretches of performances in college football’s modern era. The Tigers held all 12 regular season opponents under 300 yards of offense, becoming the first team in ESPN Stats & Info records back to 1996 to open a season with 12 consecutive performances allowing fewer than 300 yards.

That unit was led in part by a veteran secondary that produced three picks in the first four rounds of the 2020 NFL Draft. After the departure of four NFL draft picks and an additional NFL free agent signee from the 2018 defensive line, Clemson developed an extremely young defensive line in 2019, the benefits of which should only multiply in 2020. On the interior, Todd Bates enters his fourth season overseeing Clemson’s defensive tackles after all of his starters across his fi rst three seasons earned All-ACC recognition. His mentorship helped develop sophomore Tyler Davis (Apopka, Fla.), who started 13 games as a true freshman en route to a second-team All-ACC selection a season ago, the most starts by a true freshman defensive lineman in Clemson history.

The group also got an infusion of talent from its impressive 2020 recruiting class, which includes the nation’s consensus No. 1 prospect, Bryan Bresee (Damascus, Md.). At defensive end, Clemson worked a group of three different starters for its two starting positions throughout the 2019 season. Two of those three return in 2020, with the lone departure being when Logan Rudolph elected to forego his final two seasons of eligibility in favor of graduating to pursue a career in acting. Senior Justin Foster (Shelby, N.C.) and junior Xavier Thomas (Florence, S.C.), the two returning starters of that trio, combined for 18.5 tackles for loss in 21 combined starts a season ago.

Clemson has depth at the position in the form of a pair of redshirt sophomores, K.J. Henry (Winston-Salem, N.C.) and Justin Mascoll (Snellville, Ga.). The duo combined to play about 600 snaps for the Tigers in 2019. The scholarship group is rounded out by redshirt freshman Greg Williams (Swansea, S.C.), who is in his second year transitioning to end from linebacker, as well as midyear enrollee Myles Murphy (Marietta, Ga.). Clemson lost its sixth unanimous All-American in school history from its 2019 linebacking corps when Isaiah Simmons opted to enter the 2020 NFL Draft, but Clemson is confident in the depth of the unit it returns in 2020. The lone returning starting linebacker is fifth-year senior James Skalski (Sharpsburg, Ga.), a hard-nosed Mike linebacker affectionately referred to by Swinney as a “war daddy” who finished 2019 credited by the staff with 105 tackles. The competition on either side of him at the Will and Nickel/Sam positions represented one of the spring’s most intriguing position battles.

Redshirt junior and graduate Baylon Spector (Calhoun, Ga.) has been an impactful special teams contributor throughout his career and recorded his first two career sacks in Clemson’s Fiesta Bowl win against Ohio State. The openings on the outside could also provide opportunity for Mike Jones Jr. (Nashville, Tenn.), a spring practice standout who enters his redshirt sophomore campaign having seen nearly 200 career defensive snaps in a reserve role. Redshirt sophomore Jake Venables (Clemson, S.C.) returns after being one of Clemson’s most productive linebackers on a per-play basis a year ago, when he posted 38 tackles and 9.5 tackles for loss despite playing only 217 defensive snaps.

Clemson’s secondary will have to replace three of its starters from 2019, but it will do so under the guidance of FootballScoop’s 2019 Defensive Backs Coaches of the Year, Mickey Conn and Mike Reed, who serve as Clemson’s safeties and cornerbacks coaches, respectively. Conn lost two senior starters and leaders in Tanner Muse and K’Von Wallace, while Reed lost first round NFL Draft pick A.J. Terrell. For Conn, Clemson’s predilection for sub packages with additional safeties has meant plenty of experience for one of his presumed starters for 2020, fifth-year senior Nolan Turner (Vestavia Hills, Ala.). Turner has played 43 career games for Clemson including four starts last year in defensive-back-heavy personnel groupings. He enters his final season of eligibility with three career interceptions, all three of which have come in postseason play, including one against Notre Dame in the 2018 Cotton Bowl, one against Virginia in the 2019 ACC Championship Game and one to seal Clemson’s Fiesta Bowl win against Ohio State in 2019.

Beyond Turner, the safeties unit represents another position at which Clemson will be sorting through an abundance of talented, young depth. Sophomores Lannden Zanders (Shelby, N.C.) and Joseph Charleston (Milton, Ga.) combined for 27 game appearances and about 200 defensive snaps on top of their special teams responsibilities in 2019, while fellow sophomore Jalyn Phillips (Lawrenceville, Ga.) appeared in 14 games while cross-training at safety and Clemson’s Nickel/Sam linebacker spot. Ray Thornton III (Columbus, Ga.) also returns after redshirting in 2019.

Clemson might have produced the ACC’s most unlikely all-conference selection in 2020 when Derion Kendrick (Rock Hill, S.C.) earned second-team All-ACC honors just months after transitioning to the position in the 2019 offseason. Changing positions out of necessity during 2019 spring practice paid dividends for Clemson and Kendrick, who started all 15 games and recorded two interceptions as Clemson finished second in the nation in opponent passer rating (105.37). Returning players potentially contesting for the starting spot opposite Kendrick are redshirt junior LeAnthony Williams (Atlanta, Ga.), junior Mario Goodrich (Kansas City, Mo.) and sophomores Andrew Booth Jr. (Dacula, Ga.) and Sheridan Jones (Norfolk, Va.). All four of those players appeared in at least 11 games and played at least 75 defensive snaps for Clemson in 2019.