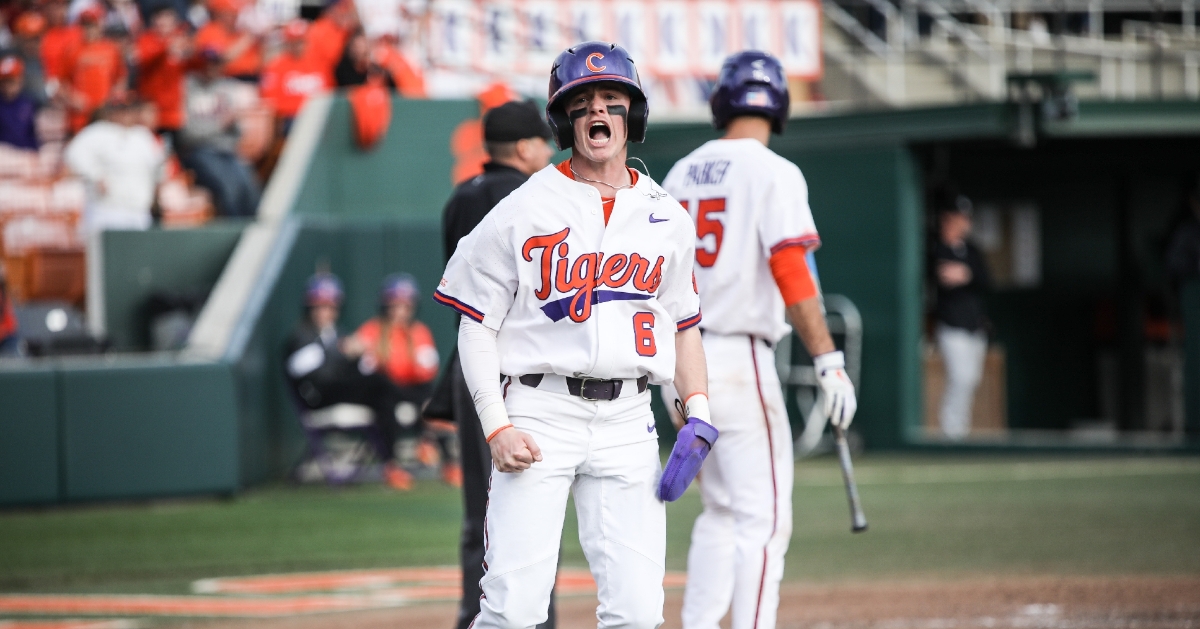 CLEMSON – James Parker and a little pluck saved the Tigers.

Parker was injured running to first during the season’ fourth game against Furman but returned to the lineup this weekend with a two-hit, two-RBI day Sunday as the Tigers won the series with arch-rival South Carolina with a 5-2 victory Sunday afternoon at Doug Kingsmore Stadium.

Parker ripped a two-out, two-run double to right-center in the seventh that broke a 2-2 tie and score the winning runs for the Tigers in the rubber game of the series. Clemson has won five of the last six season series with South Carolina, and has won six of the nine “winner takes all” games since it was moved to a three-game format.

Clemson improves to 9-2 with the victory while South Carolina falls to 7-4.

"Great win today by our guys. Definitely not pretty. Came from behind," head coach Monte Lee said. "Had some opportunities offensively. Mat Clark was the difference today for us. We had an opportunity in the sixth, bases loaded, and didn't get anything out of it and made a mistake there at first base, we passed the runner and you can't do that. But we persevered and that was a big deal for us. We didn't get down. The seventh inning was huge. I thought we played a really good game defensively, too."

The Tigers jumped out to a 1-0 lead in the first. Elijah Henderson walked to lead off the inning and moved to second when Kier Meredith was hit by a pitch. Davis Sharpe rolled into a force at third for the first out, leaving runners at the corners for Bryar Hawkins. Hawkins hit the first pitch deep into the right-centerfield gap but the wind kept it in the park and the ball was caught neat the wall. Henderson tagged and scored and the Tigers led 1-0 early.

The Gamecocks answered and took the lead in the top of the second. Dallas Beaver stroked a two-out single to center and moved to third on Andrew Eyester’s double down the line in left. Noah Campbell followed with a two-run single as the Gamecocks to a 2-1 lead.

Strider was done after 49 pitches (36 for strikes). Strider went four innings, gave up two runs (both earned), walked one and struck out five.

What happened next was a strange series of events, even for a rivalry series. Hawkins led off the inning with a single to third, and James Parker was asked to bunt him into scoring position. However, Parker couldn’t get the bunt down but eventually walked. That brought up Adam Hackenberg, who dropped a bunt into the no-man’s land between the pitcher and third for a hit that loaded the bases.

Things then got weird. Dylan Brewer lofted a dying quail to short left, and it appeared that Eyester caught the ball on a dive. Hawkins didn’t tag up at first, but was sent home and was thrown out at the plate with ease. The umpire ruled that Eyester trapped the ball and it appeared the bases were still loaded with one out, but after a review, it was ruled that Brewer passed Hackenberg at first base after Hackenberg went back to tag up. Instead of the bases loaded, there were two out with runners at second and third. That brought up the struggling Sam Hall, who once again struck out to end an inning and South Carolina held onto its 2-1 lead.

The Tigers finally broke through in the seventh. Henderson singled with one out and moved to second on Meredith’s sharp single to left. Sharpe was plunked on the left arm to load the bases, and Hawkins then hit a towering fly ball to center to score the tying run. Parker then lined an 0-1 pitch into the gap in right-center to score both runs and give Clemson a 4-2 lead.

That brought up Hackenburg, whose sharp single to left appeared to be hit too hard to score Parker. However, Parker was waved around third and the throw appeared to beat him to the plate by 20 feet. He was called safe by the home plate umpire, and a video review showed that Parker slid around the tag and got his hand on the plate before the tag. At the end of seven, Clemson led 5-2.

Parker said he didn't change his approach heading into his critical at-bat.

"The approach was the same its been for me the whole weekend," Parker said. "Really just trying to stick to our team we approach we've been working on. I was looking for a pitch to hit the other way because that's my strength right now and just seeing balls up in the zone. The moment wasn't any bigger than any other moment for me. I tried to treat it the same. When the ball got down that was awesome."

Clark’s sterling day was done after the seventh, and he earned his second win of the season with three scoreless innings. Clark struck out four and walked none. He was replaced by Carson Spiers to start the eighth.

Spiers shut down the Gamecocks over the final two innings to record his fourth save.

Clemson hosts the College of Charleston Wednesday at 4 pm (ACCNX) and then begins ACC play this weekend, hosting Boston College in a three-game series.