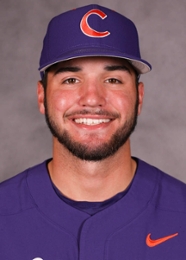 
Before Clemson: Drafted in the 34th round (No. 1,014 overall pick) by the Pittsburgh Pirates … all-state as a senior … county pitcher-of-the-year as a senior … set the school career record for strikeouts … member of the state runnerup team and region championship team as a senior … lettered four times in baseball at Mill Creek High School, where he was coached by Doug Jones.