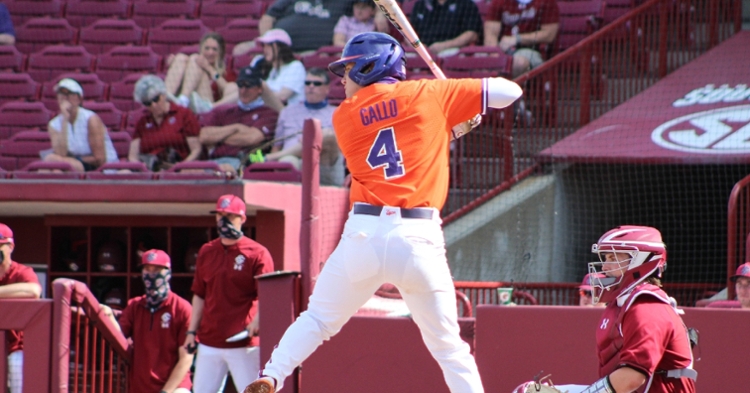 Andrew Eyster and the Gamecocks did it again, walking off the Tigers in the bottom of the last inning.

Clemson reliever Evan Estridge sandwiched walks around two outs, but he gave up the game-winning hit to Eyster. South Carolina improves to 6-0 with the win and wins the season series. Clemson falls to 3-2 with the loss. The final game of the series will be played on May 11th in Clemson’s Doug Kingsmore Stadium.

The Tigers didn’t waste any time in jumping out to a quick lead. Bryar Hawkins drew a two-out walk in the top of the first and came to score on a double to left-center by James Parker, giving Clemson the 1-0 lead.

The red-hot Wes Clarke homered on a 1-1 pitch in the bottom of the third to tie the score at 1-1 and it stayed that way until the top of the fifth.

Dylan Brewer drew a walk on a 3-2 pitch to lead off the inning, and with one out Hawkins singled through the right side to move Brewer to third. Hawkins stole second with two out, and Jonathan French followed that with a two-run double to right that gave the Tigers a 3-1 lead.

The lead didn’t last long as the Gamecocks chased starter Ty Olenchuk in the bottom of the frame. Braylen Wimmer homered to lead off the inning, and later in the inning Clarke hit a three-run shot to give the Gamecocks a 5-3 lead.

Olenchuk pitched 4 1/3 innings, giving up two runs while walking none and striking out six. Reliever Mat Clark gave up most of the damage, getting tagged for three runs in just 1 2/3 innings.

The seventh was a big inning for the Tigers. Davis Sharpe walked to lead off the inning but was forced at second on a grounder by Hawkins. Parker then singled to left field and French walked to load the bases with one out. Pinch-hitter Alex Urban was safe on a single that scored Hawkins to make it 5-4.

The Gamecocks took advantage of a throwing error in the bottom half of the inning to score two runs, however, tying the game at 7-7.

The Tigers were the beneficiaries of a lucky break in the top of the ninth. Parker led off the inning and hit a high fly to center, and it appeared as though the wind moved the baseball enough to cause centerfielder Noah Myers to drop it for an error.

French struck out, but Urban golfed a single to right to put runners at first and second with one out. The Gamecocks went to the bullpen, replacing Andrew Peters with Will Sanders. Reid reached on a fielder’s choice that forced Reid but moved Parker to third with two out. A fly ball ended the threat, however, leaving that game tied at 7-7.

South Carolina plays at Winthrop (the Gamecocks hosted the Eagles last week and won 12-4) on Tuesday and then host Mercer for a three-game series starting Friday. The Tigers host East Tennessee Stadium at 4 p.m. Tuesday, then start ACC play Friday with a three-game home series against Notre Dame.