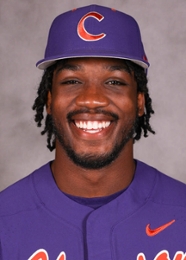 
Missed most of the 2018 season due to two injuries and most of 2019 due to several injuries … one of the team’s fastest players … a career .238 hitter with a .365 slugging percentage and .436 on-base percentage in 22 games (20 starts) over two seasons … has three doubles, a triple, homer, six RBIs, 11 runs, 13 walks, nine hit-by-pitches and six steals … two-time ACC Academic Honor Roll member.


2019: ACC Academic Honor Roll member … hit .318 with three runs, two doubles, an RBI, a .409 slugging percentage, .483 on-base percentage, five walks, two hit-by-pitches and two steals in nine games (eight starts, including six in left field and two as the DH) … suffered an injury in March and missed the rest of the season; received a medical redshirt … went 2-for-3 with an RBI and a walk in the first game of a doubleheader against No. 3 North Carolina on March 9; his run-scoring single with one out in the ninth inning tied the score … went 1-for-2 with three runs and two hit-by-pitches in the second game of a doubleheader against No. 3 North Carolina on March 9 … No. 80 sophomore in the nation in the preseason by Perfect Game … No. 33 ACC prospect for the 2020 draft in the preseason by D1Baseball.