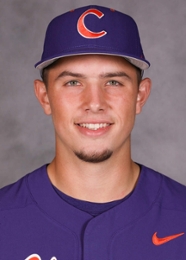 Catcher
B I O


Catcher who has the opportunity to become a starter … has shown power and good defensive abilities behind the plate … No. 41 ACC prospect for the 2021 draft in the preseason by D1Baseball.


Before Clemson: Drafted in the 39th round (No. 1,172 overall pick) by the Kansas City Royals … state player-of-the-year as a senior … three-time, first-team all-state … member of the state championship team as a junior and senior … two-time all-state linebacker … lettered five times in baseball and two times in football at Miller School of Albemarle, where he was coached by Billy Wagner.


Personal: His father, Erick, played football at Virginia … his mother, Nicole, played volleyball at Lehigh … his brother, Christian, was a quarterback at Penn State from 2013-15 … his brother, Brandon, was a junior on the Penn State men’s soccer team in 2019 … his uncle, J.D. Hackenberg, played football at Army … majoring in financial management … born Adam Mitchell Hackenberg on Sept. 8, 1999 in Palmyra, Va.