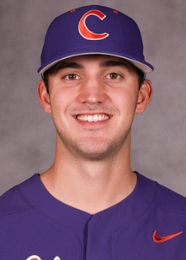 
Sophomore infielder who has the potential to become a starter in future seasons.


2019: ACC Academic Honor Roll member … hit .232 with six runs, three doubles, a homer, eight RBIs, a .339 slugging percentage, .271 on-base percentage, three walks and a steal in 27 games (15 starts, including 12 at third base and three at second base) … had a .950 fielding percentage, committing only two errors … hit .350 with two outs … hit a two-run homer off the bench against East Tennessee State on Feb. 26; was his first career hit … hit a two-run double at Boston College on March 22 … went 3-for-4 with an RBI and a run against No. 8 Louisville on April 7 … No. 268 freshman in the nation in the preseason by Perfect Game … No. 55 freshman in the ACC in the preseason by Perfect Game … played for Wilmington in the Coastal Plain League in the summer, where he hit .259 with seven doubles, a triple, homer, six RBIs, 10 runs and seven steals in 24 games; Coastal Plain League All-Star Game selection.


Before Clemson: North-South All-Star Game selection … all-state as a senior … four-time all-region … holds the school record for career hits … lettered five times in baseball at T.L. Hanna High School, where he was coached by Daniel Crenshaw.


• Favorite hobbies – Hunting, hanging out with friends and driving with the windows down
• Interesting fact about family/parents – His father pitched at Clemson from 1989-91
• One fact that most people don’t know – Scared of spiders
• Favorite food or candy – Peach cobbler
• Proudest childhood accomplishment – Shooting his first deer at eight
• Ideal vacation spot – Any farm in Iowa
• Childhood hero – His grandfather
• One person, living or dead, to eat dinner with – Julius Erving