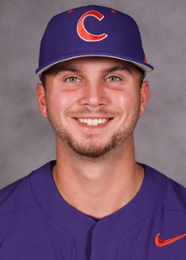 
Sophomore who was one of the team’s top hitters and showed flashes of power in 2019.


Before Clemson: All-state selection … region MVP as a junior … lettered four times in baseball at West Forsyth High School, where he was coached by Mike Pruitt.