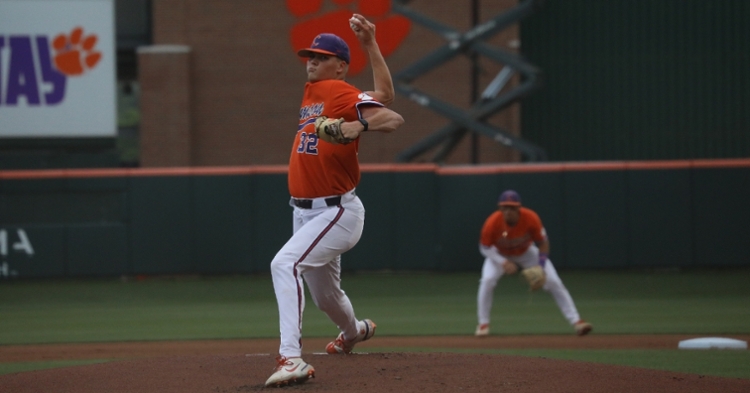 Anglin was terrific in the victory over Georgia Tech (photo by Alana McCallion).

CLEMSON – Mack Anglin pitched seven strong innings and scored three runs while driving in two to lead Clemson to a 9-3 victory over No. 21 Georgia Tech in the first game of a crucial three-game series Friday evening at Doug Kingsmore Stadium.

Anglin was terrific in picking up the win. He didn’t allow a run through six innings before giving up three in the seventh. He threw 116 pitches (70 for strikes), gave up three runs on five hits, walked just one and struck out eight.

Blackwell was 2-for-4, Bryar Hawkins was 3-for-4 with two RBIs and freshman Will Taylor, in his first action this season (suffered a torn ACL as a wide receiver during football season), was 1-for-4 with a run scored.

It didn’t take the Tigers long to jump on Tech starter John Medich in the bottom of the first. Benjamin Blackwell led off with a walk and quickly moved to second on a wild pitch. Cooper Ingle singled up the middle to score Blackwell for a 1-0 lead. The Jackets worked around Wagner, who walked on a 3-1 count. Blake Wright hit a fly ball to medium right that allowed Ingle to move to third with one out. Bryar Hawkins followed with a slow roller to third that scored Ingle for a 2-0 lead. Wagner was caught stealing third to end the inning.

Blackwell singled to start the bottom of the third and moved to second on a wild pitch. Two outs later Wright poked a single into right and Blackwell beat the throw to the plate for a 3-0 lead.

Caden Grice walked to lead off the bottom of the fourth and he moved to third when Dylan Brewer lined a one-out double down the line at third. Blackwell then singled up the middle to score both runners for a 5-0 lead.

Bryar Hawkins singled to lead off the fifth, but he was quickly forced at second on a grounder by Taylor. With two out, Jonathan French launched a homer that just cleared the wall in center, his sixth of the season. Through five innings Clemson led 7-0.

Blackwell was once again the catalyst in the sixth, reaching on a muffed throw to start the inning. He moved to second on Wagner’s one-out walk and scored on Wright’s laser double off the glove of the defender in left. Wagner then scored on Hawkins’ single through the left side and Clemson led 9-0 through six innings.

The Jackets finally broke through against Anglin in the seventh, scoring three runs, including Stephen Reid’s two-run blast off the hitter’s eye in center.

Atlanta native @frenchjonathan_ hits his sixth homer of the year!!