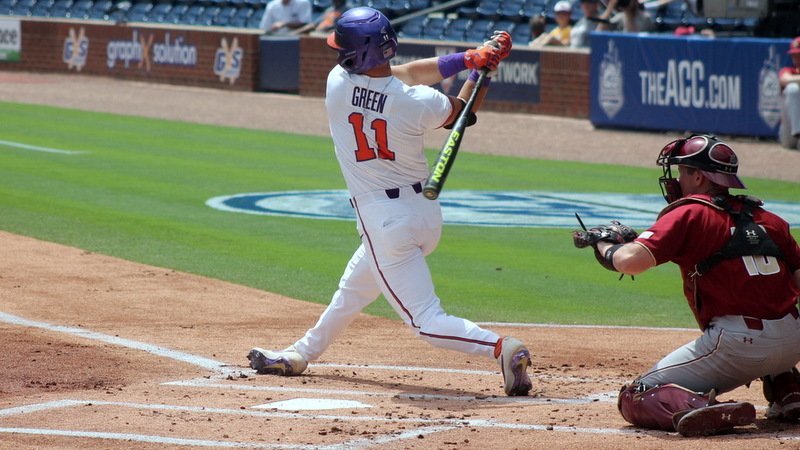 DURHAM, NC – Clemson’s chances of making the NCAA Tournament are on life support.

The Tigers entered the ACC Baseball Championship in need of wins if they want to make the NCAA Tournament. They still need a win after Tuesday’s 11-inning loss to Boston College.

Boston College scored two times in the 11th and Cody Morissette homered twice as the 12th-seeded Eagles defeated the eighth-seeded Tigers 7-5 at Durham Bulls Athletic Park. Clemson falls to 33-24 on the season and with the loss is unable to advance to Saturday’s semifinals.

Clemson plays top-seeded Louisville Thursday at 11 a.m. The Tigers' RPI dropped six spots to No. 43 with the loss Tuesday.

The Tigers took an early lead in the bottom of the second. Chad Fairey led off the inning with a single down the left field line and moved to second on a fielder’s choice by Bryar Hawkins. Hawkins reached on an error on the play and Fairey advanced to third, giving the Tigers runners at the corners with no out.

Sam Hall grounded into a double play that scored Fairey for a 1-0 lead. The double play was the second in the first two innings for the Tigers.

A single and Morissette’s first homer of the day gave Boston College a 2-1 lead in the top of third, and Souzzi homered in the fourth to give the Eagles a 4-1 lead.

The Tigers were unable to reach Pelio for another run until the bottom of the sixth. Michael Green led off with a walk and Logan Davidson singled up the middle to put the Tigers in business with Green at third. Grayson Byrd struck out swinging, but Kyle Wilkie’s fly to center scored Green to make it 4-2. Fairey walked to load the bases but the Tigers were unable to do any more damage against Pelio.

Clemson wasted yet another opportunity to score in the seventh. Jordan Greene singled with one out and moved to second when Bo Majkowski was hit by a pitch. With two out in the inning, the Eagles worked around Davidson, who walked to load the bases for Byrd. Byrd flew out to deep center to end the threat.

Brian Dempsey homered to lead off the eighth for the Eagles, marking the first time this season Boston College hit four homers in one game, and they led 5-2.

The Tigers finally put together a big inning in the eight. Wilkie walked to lead off the frame, moved to second on a wild pitch and third on a fly out by Fairey. Davis Sharpe struck out for the second out, but Sam Hall singled up the middle for the Tigers’ first hit with a runner in scoring position on the day, trimming the Eagle lead to 5-3.

Jordan Greene walked on a full count and Majkowski was hit by a pitch to load the bases. That brought up Green, who singled sharply over the head of the shortstop to score both Greene and Hall to tie the score at 5-5. Clemson had been 0-10 with runners in scoring position prior to the eighth. 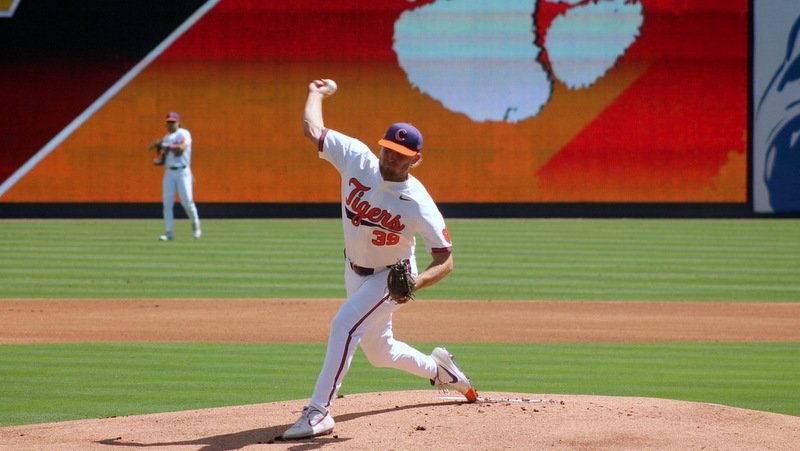 Travis Marr started the game for the Tigers

The Tigers wasted another scoring chance in the 10th. Greene singled with two out, and Majkowski was hit by a pitch for the third time (all three times on the first pitch of the at-bat). Both runners moved up on a wild pitch, but Green rolled out to second to end the threat.

That brought reliever Carson Spiers for another frame in the 11th after entering the game in the ninth. A single, a walk and an error on Fairey scored the first run for a 6-5 Boston College lead, and another single scored the second run of the inning for a 7-5 lead. Spiers was done after an incredible 55 pitches, giving up two runs (one earned) in 2 1/3 innings of work.

Holt Jones came on in relief of Spiers and walked the first batter he faced to load the bases, and he was relieved by former starter Keyshawn Askew. Askew struck out the only batter he faced – for the second out – and Askew’s day was done. He was replaced by Luke Sommerfeld, who induced an inning-end flyout.

The Tigers went down in order in the bottom of the 11th.