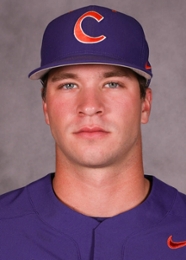 
Power-hitting sophomore who emerged late in the 2019 season to become a starter.


Before Clemson: North-South All-Star Game selection … three-time all-state and four-time all-region … team MVP as a junior and senior … member of the state championship team as a freshman … member of the region championship team as a freshman, sophomore and senior … lettered four times in baseball and two times in football at Ninety Six High School, where he was coached by Chad Ellis.


• Favorite hobbies – Going to the lake, hanging out with friends, hunting and fishing
• Interesting fact about family/parents – His grandfather played baseball for the Expos and Dodgers
• One fact that most people don’t know – Has been to over 20 states and five countries
• Favorite food or candy – Escargot
• Proudest childhood accomplishment – Saved eight puppies and found them all homes when he was 15
• Ideal vacation spot – Any beach with good weather and a breeze
• Childhood hero – His father
• One person, living or dead, to eat dinner with – Plato

Re: One thing Tucker Carlson and Bone Spurs Trump