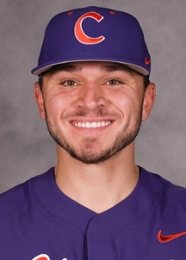 
Before Clemson: All-region selection as a junior … his team advanced to the semifinals of the state playoffs as a senior … lettered three times in baseball, one time in football and one time in basketball at Johns Creek High School, where he was coached by Billy Nicholson.